Start a Wiki
watch 01:50
The Loop (TV)
Do you like this video?
Amanda Haynes (Elizabeth Lackey) is the villainess of "Table Stakes", episode 1.15 of CSI (airdate February 22, 2001). She was introduced as the wife of Patrick Haynes, with the couple holding a party at the house of legendary former showgirl Portia Richmond, during which showgirl Lacey Duvall was found dead in the pool.

Amanda and Patrick claimed that they were friends with Portia, and that they were house sitting for her as she was vacationing in Europe during their search for a place of their own. However, the episode's progression would reveal the truth: Patrick's real name was Chad Matthews, and he and Amanda (whose real name is never revealed) were on the run due to Chad being responsible for the rape and murder of a Texas cheerleader.

As for Portia, the evil siblings befriended Portia as a means of obtaining her wealth, with Chad knocking her unconscious before feeding her to her pet piranhas. In the episode's present events, Chad began a relationship with Lacey, eventually telling her the truth about his identity. During the party, Lacey confronted Amanda, proclaiming that Chad loved her and that he planned to be with her and take her on as his new partner in crime. Enraged, the evil Amanda stranged Lacey to death before dumping her body in the pool. The CSI investigation into Lacey's death led to them investigating Portia's disappearance, with Amanda's status as Chad's sister rather than his wife being revealed by the false fingernail she lost at the scene of the crime matching the semen DNA from the Texas cold case.

Gil Grissom provided Greg Sanders with a straw he collected from Amanda, with the DNA proving Amanda as Chad's sister and Lacey's killer. Gil made Amanda's reveal to Chad while interrogating him with Jim Brass and Catherine Willows, having Amanda come into the interrogation room for the reveal. When confronted by her shocked brother, Amanda scolded Chad for telling Lacey about their true identities, stating that he never made mistakes until he met her and snarling that he couldn't betray her. The siblings later attempted to deny killing Portia, only for Gil to reveal that traces of cholestrol in Portia's piranhas proved how Chad had killed her. With that, Amanda was arrested alongside Chad for Lacey's murder and her role in Portia's murder. 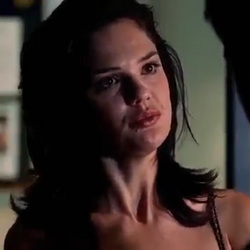 Amanda during her villainous reveal
Add a photo to this gallery
Retrieved from "https://femalevillains.fandom.com/wiki/Amanda_Haynes_(CSI)?oldid=173597"
Community content is available under CC-BY-SA unless otherwise noted.