Start a Wiki
watch 01:39
The Loop (TV)
Do you like this video?
Amanda (Christine Baranski) is the main villainess from the 2011 film, Who is Simon Miller?

Amanda is a covert operative and the superior of the film's titular protagonist, Simon Miller, who his family (wife Meredith, son Kevin, and daughter Sarah) learns is actually a spy. Simon was sent on the case regarding noted scientist Dr. Malinkov and his daughter, Anya, who have escaped from their oppressive environment in Chechnya, but have sinister forces looking to take them back there.

Later in the film, Amanda turned heel and revealed herself as a traitor; as she and her co-hort, Jeffrey, were planning to trade the Malinkovs for their own personal gain. The revelation comes when Kevin takes Amanda's phone and calls one of her contacts, who speaks clear Russian. Knowing that the Millers have found her out, the evil Amanda ordered Jeffrey to kill Andres, who they held captive, with plans to kill the Millers later, but the quartet escapes.

Amanda encounters all of the Millers once again at the near end of the film, after they rescue the Malinkovs. Amanda, with Jeffrey, holds the family at gunpoint and forces them to surrender the Malinkovs, which leads to a melee at the stairway. After the scuffle, both Amanda and Jeffrey are arrested. 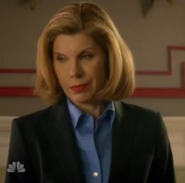 Amanda after being revealed as a traitor 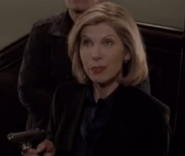 Amanda holding the Millers at gunpoint

The evil Amanda arrested
Add a photo to this gallery
Retrieved from "https://femalevillains.fandom.com/wiki/Amanda_(Who_is_Simon_Miller%3F)?oldid=179879"
Community content is available under CC-BY-SA unless otherwise noted.