Alwyn Pierce (Yvonna Kopacz Wright) was a villainess from "Memory Kings", episode 2.04 of Unforgettable (airdate August 18, 2013). She was an assistant neurology professor at Algonquian University and a former graduate student of Dr. Eugene Lustig.

When Eugene was found dead from a fall off his roof, Alwyn became the prime suspect in his murder after it was uncovered that Alwyn had been denied tenure by Lustig just one month prior to the events, as he believed her work to be fraudulent. Alwyn took his decision badly, even creating a scene later on at a staff meeting while accusing Lustig of rigging the vote against her. When questioned by detectives Al Burns and Carrie Wells (the latter of whom was a part of a study Lustig conducted on hyperthymesia), Alwyn admitted to having been angry at Lustig for denying her tenure, claiming that he blackballed her and that she'd felt she earned his support after working with him for ten years. When asked about her whereabouts for the time of his murder, Alwyn vehemently denied killing Lustig before storming off to her class.

However, as later uncovered by Jay Lee, Alwyn turned heel and broke into Lustig's office to steal the tapes containing his research with Carrie and the other members of the hyperthymesia study group. The villainess committed the theft one day after the tenure meeting, and according to later revelations, the evil Alwyn had stolen the tapes in an attempt to prove her belief that Lustig had falsified his research; a belief that was revealed to have been formed due to Alwyn's own bitterness.

When detectives went to Alwyn's apartment to arrest her, however, they were surprised to find the thief murdered via strangulation. It was later uncovered that Alwyn's killer had been Dale Parsons, another member of Lustig's research group. Dale was revealed as a serial killer, having been committing murders as a method of ceasing the affects of his hyperthymesia. During a group session, Lustig asked the date of a day when Dale committed one such murder, forcing him to lie. But once he realized that his lie could lead Lustig to uncovering his dark deeds, Dale killed Lustig and later Alwyn (after she called him to ask about Lustig's research) to cover his tracks. 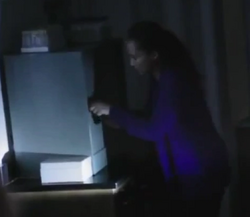 Alwyn's reveal as a villainous thief 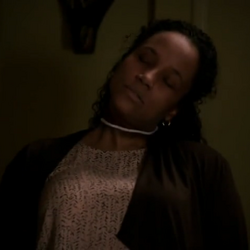 Alwyn's deceased body
Add a photo to this gallery
Retrieved from "https://femalevillains.fandom.com/wiki/Alwyn_Pierce_(Unforgettable)?oldid=162469"
Community content is available under CC-BY-SA unless otherwise noted.