Start a Wiki
watch 01:51
The Loop (TV)
Do you like this video?
Alotta Fagina (Fabiana Udenio) is a secondary antagonist in the 1997 spy comedy "Austin Powers: International Man of Mystery".

Her character is the personal secretary for another secondary antagonist, Number Two (Robert Wagner). They are both agents in an evil organization led by the film's main antagonist, Dr. Evil (Mike Myers).

Alotta makes her first appearance at a Las Vegas casino. She is wearing a low cut, gold evening dress. She acts as the arm candy for her boss, Number Two, as he plays blackjack. At one moment she exchanges a flirtatious glance with the film's hero, Austin Powers (Mike Myers). Austin is accompanied by his partner, fellow British agent Vanessa Kensington (Elizabeth Hurley). Between hands, Number Two introduces Alotta as his "Italian Confidental Secretary". Austin is understandably shocked by her suggestive sounding name. Keeping his own identity a secret, Austin employs the alias "Richie Cunningham".

Austin next encounters Alotta at her penthouse in downtown Las Vegas. He has been tasked by his superior, Basil, to infiltrate her residence and uncover plans for Project Vulcan, the codename for Dr. Evil's scheme for world domination. The interior decor of the penthouse is Japanese-inspired. Austin is able to snap photographs of the key documents just before he hears Alotta approaching from outside. A moment later Alotta enters the penthouse, this time wearing a blue evening dress with white sequins.

Austin fishes for information on Project Vulcan; Alotta replies "We can talk about business later. Let me slip into something more uncomfortable". Much aroused, Austin watches as Alotta closes an Oriental sliding door and proceeds to get undressed in behind it. Breathless, Austin observes her silhouette seductively remove her nylons and brassiere. When the sliding door reopens, she is wearing a short white satin bathrobe and her hair is pinned up.

She beckons him to the Jacuzzi, which Austin, of course, cannot resist. Alotta disrobes and steps into the Jacuzzi; her ample bosom is more prominent than ever as it seems to float upon the water. Once in the Jacuzzi, Alotta offers Austin a back massage, during which time she inspects the pockets of his nearby suit and finds that he is in fact Austin Powers. It is not long before Alotta, so charmed by Austin, suggests that they make love.

Before her next appearance, Austin proudly reveals to Vanessa that he "shagged" Alotta in order to get information. As a romantic interest has developed between the two over the course of the mission, Vanessa is hurt by Austin's betrayal. She is a conservative woman of the '90s and tells Austin he cannot go shagging anyone he wants even if it is for the good of the mission. Austin sincerely tells Vanessa, "You're everything to me". Later, when they are undercover on a tour of Virtucon, the corporate front for Dr. Evil's empire, Austin looks to put Vanessa's mind at ease by stating "She (Alotta) is the village bicycle, everybody's had a ride!" This seems to resolve Vanessa's jealousy.

Alotta's final appearances come at the climax of the film in Dr. Evil's headquarters in the desert outside Nevada. She is briefly seen at a table with Dr. Evil's other agents. At this moment she wears a white dress. She has no lines.

Later, she appears just in time to save Dr. Evil from being captured by Austin Powers. A revolving platform spins around to reveal Alotta holding Vanessa at gunpoint. She wears an odd blue checkered sweater and black leggings combination.

After a stand-off between multiple parties, Vanessa sees an opening and Judo chops Alotta on the neck, knocking her out cold. Austin and Vanessa immediately look to escape the headquarters as Dr. Evil has set it to self-destruct. Alotta is not seen again in the film. 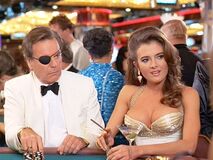 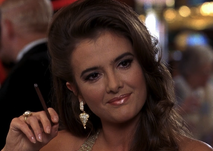 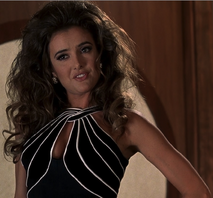 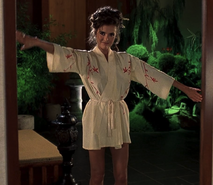 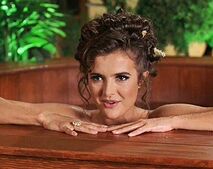 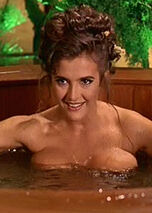 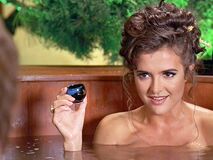 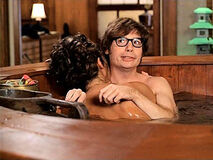 Retrieved from "https://femalevillains.fandom.com/wiki/Alotta_Fagina_(Austin_Powers:_International_Man_of_Mystery)?oldid=129203"
Community content is available under CC-BY-SA unless otherwise noted.