The Female Villains Wiki
Register
Don't have an account?
Sign In
Advertisement
in: 1970s, Boss, Brunette,
and 20 more

Alotta is the Queen of the Witches who makes a deal with the people of a local village: If they sacrifice a child to her once a year, she will leave them be. The "donated" child then has her soul removed and becomes part of Alotta's coven.

Things change for the villainess one day when a young Vietnam veteran named David travels through the area. After being chased by several naked hippie girls who try to steal his money, David accidentally slips by a stream and falls unconscious. Yyalah, a member of Alotta's coven, comes to his aid and he instantly falls in love with her. However, when the queen finds out about this, she decides that she should have David to herself.

After learning that Yyalah is forbidden from loving any being that still has a soul, David pleads with Alotta to perform the ritual to take his own. The queen agrees, with the stipulation that if Yyalah rejects him, that he shall become hers instead. Alotta orders David to murder a man known as "The Padre", who had recently become fed up with the woman's devilry and vowed to put an end to her. When local woodsman Lonzo confronts Alotta over Padre's death, the villainess decides this would be a perfect way to rid herself of Yyalah and tells the angry man that she was the culprit. As she anticipates, David does return to Alotta towards the end of the film. However, while in her embrace, he stabs her in the back with a knife. In her dying breath, she places a curse - that he will be murdered by his own kind - on David just moments before the other witches come to devour her corpse. Unfortunately for her, David survives the attempt on his life and enjoys a happy ending together with Yyalah. 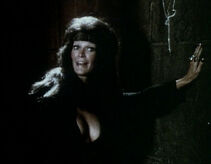 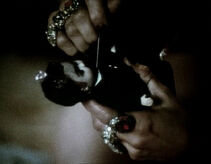 Cursing Padre with a voodoo doll. 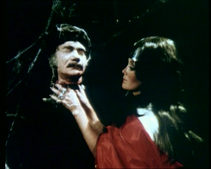 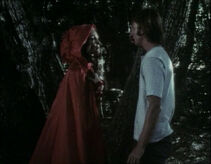 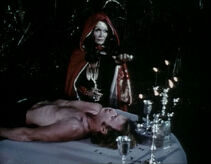 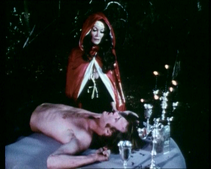 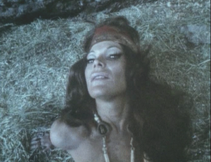