Alma (Tracey Cook) is a vampire in the 1992 episode "For I Have Sinned" for the TV series "Forever Knight".

Alma is first seen in the dance club, The Raven, where she is dressed in black leather and flirtatious, trolling for human men on whom to prey.  Nick's partner, Det. Don Schanke (John Kapelos) spots Alma leaning up against the bar when he goes into the Raven looking for Nick Knight (Geraint Wyn Davies). Alma attempts to pick him up, but Nick interrupts and takes Don outside, telling him it is too dangerous for him inside.

Resenting Nick's interruption of their conversation, Schanke goes back later on his own. Alma is happy to resume her seduction, and the two of them head out on the dance floor.  Alma is now wearing a black slinky short gown with a long coat, which conseals her thigh high black stockings and thigh high black boots.  She has black opera gloves on as well, and her red hair is up in a beehive style.

They head to the back room, where Alma continues to seduce him by stripping off his sports coat and flinging him onto a booth bench.  She then mounts him, and he begins overheating.  Alma tells him to take slower easy breaths, telling him she doesn't want his blood to boil, as it spoils the taste.  As Alma is about to lean in and bite his neck, Janette DuCharme (Deborah Duchene) intervenes by calling out Alma.  She tells Schanke to just got out of here.  She continues, that "Alma is not the kind of girl that you play around with.  The consequences could have prooved fatal".  Don responds by saying, "You mean I could have caught..."  Janette then interupped and said, "Let's just say that you would have become a permanent member of the night shift".  As Schnake turns to leave, she tells him to never ever return to the club, and that she is doing him a favor.  The last we see of Alma is her glaring at Janette for interrupting her fun and meal, and you hear a faint growl coming from her. 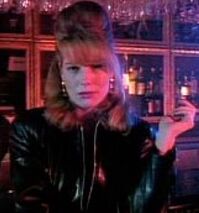 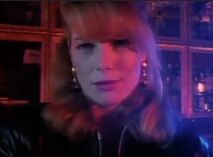 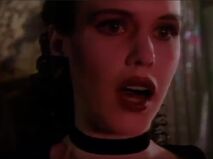 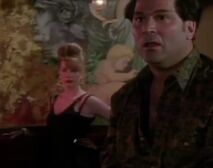 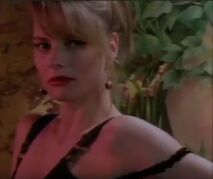 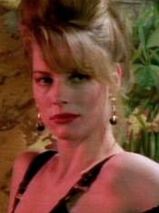 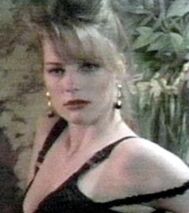 Add a photo to this gallery
Retrieved from "https://femalevillains.fandom.com/wiki/Alma_(Forever_Knight)?oldid=69935"
Community content is available under CC-BY-SA unless otherwise noted.