Start a Wiki
watch 01:51
The Loop (TV)
Do you like this video?
Allison Hyde (Jacqueline Obradors) was the hidden villainess from "XX," episode 8.02 of Castle (airdate September 28, 2015). She was the Assistant Attorney General who was arrived in New York from Washington following the events of the previous episode, "XY."

The previous episode ended with a team of assassins going after Kate Beckett and Vikram Singh, the latter being a data analyst working at the Attorney General's office, and a series of flashbacks revealed that three members of the AG office, as well as FBI Agent Rachel McCord and her squad, were all killed in order to prevent the exposure of a memo simply known as "Loksat." Loksat was revealed to be a CIA air fleet used to transport drugs, and it was connected to disgraced Senator William Bracken (the mastermind in the murder of Kate Beckett's mother, Johanna, several years prior), leading to Beckett and Vikram confronting Bracken in his cell.

Hyde arrived at NYPD after Bracken was found murdered in his cell, speaking with detectives Javier Esposito and Kevin Ryan and asking them if she could speak to Richard Castle for help finding Beckett. She is later shown speaking to Castle regarding him being in contact with Beckett before asking him about Vikram, later adding that she spotted alarming discrepancies regarding Vikram. Hyde claimed that Vikram forged his records to get hired in the AG's office, suggesting to Castle that Vikram was a mole.

Castle appeared and tackled Vikram during his and Beckett's meeting with a pilot who was involved in Loksat, doing so believing that Vikram had his gun pointed at Beckett. In actuality, Vikram was aiming at the pilot, and regarding Hyde's claims about him, Vikram stated that he was being discredited by the Loksat mastermind. However, after Vikram cracked the encryption of the phone belonging to the assassins, he uncovered a shocking reveal:  the number they received the calls from belonged to Hyde.

At some point, Hyde turned heel and became a conspirator in Loksat, and when it was in danger of being exposed, the villainess masterminded the murders of the many people involved, sending an assassin, AJ, to commit the murders in "XY," and also sending a hit squad to go after Beckett as well as Vikram. Her earlier request to speak to Castle was mainly to get to Beckett, and regarding the claims about Vikram, the evil Hyde maligned Vikram to mask her role as a corrupt villainess. Shortly after Hyde's heel persona was revealed, the entire group went to Hyde's home and entered after hearing a gunshot. Once they entered, they found Hyde shot to death with a gun in hand, appearing to have committed suicide, only to discover later in the season that she was killed by a co-conspirator who staged it to look like a suicide. 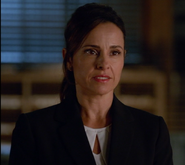 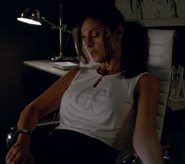 Add a photo to this gallery
Retrieved from "https://femalevillains.fandom.com/wiki/Allison_Hyde_(Castle)?oldid=169729"
Community content is available under CC-BY-SA unless otherwise noted.