Start a Wiki
watch 01:48
The Loop (TV)
Do you like this video?
Allison Cowley (Mena Suvari) is a hidden villainess from USA's hit series, Psych. She appeared in the fifth season finale, "Yang 3 in 2D" (airdate December 22, 2010), and returned in Psych: The Movie (airdate December 7, 2017) as the hidden main villainess.

In the Season Five finale, Allison Cowley appeared at the Santa Barbara police station claiming to have escaped from notorious serial killer Mr. Yin. She led police to the house where she claimed that she was held captive in, only to discover that it was occupied by an innocent family. Still believing her claims that Yin is after her, Shawn took Allison to his house to keep her safe. However, Allison is later abducted from Shawn's old bedroom, with the yin and yang symbol left as a calling card.

While watching a videotape featuring Mary Lightly (made before his murder) discussing Yin (among other subjects), Shawn and Gus see footage of Allison held captive in what is revealed to be an attic in Yin's own home. Shawn and Gus rush to Allison's rescue, only for the "hostage" to turn villainous and reveal that she is Yin's new apprentice, and that this was an orchestrated trap set to catch the pair. Allison easily breaks free of her handcuffs and points a shotgun at Shawn and Gus, all the while boasting about her ruse as she led them to Yin. Allison is later sent away by Yin and encountered Juliet; giving a fake sob story about her "abduction." She slips up and mentions Shawn and Gus being in the house, leading to the villainess fighting with Juliet. Allison is defeated by Juliet and is arrested, but as she is driven away, the evil Allison gave an ominous stare at Shawn and Gus.

In the seven years that passed following her arrest, Allison plotted her revenge on the entire SBPD, mainly on Juliet for defeating her and arresting her. She acquired the services of Thin White Duke (a self given nickname to a former snitch), to gain incriminating evidence that showed that Juliet didn't follow procedure on some of her arrest; which was collected in a manifesto that was titled, "The Crimes of Juliet O'Hara." She also orchestrated the abduction of Karen Vick's daughter, who was taken to Alcatraz and tied up with a bomb strapped inside her cell.

Allison was revealed as the true mastermind when Shawn and company were taken to the island by Duke, who was shown with Black Gentleman Ninja and Heather Rockrear. She appeared from behind and shot Duke to death, and after this, she revealed her plans for revenge against Juliet; stating that she was set to take over for Yin and accusing Juliet of ruining her plans. The crazed villainess sent her minions after the rest of the group, while Allison and Juliet fought each other once again. Reminiscent of seven years ago, the evil Allison had her shotgun pointed at Juliet, only to again end up taken down by her opponent. After Vick's daughter was freed, Allison was again arrested (off-screen). 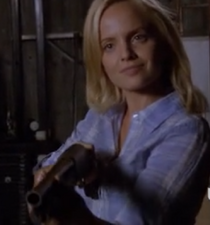 Allison pointing a shotgun at Shawn and Gus, revealing herself as Mr. Yin's apprentice

Allison's evil stare
Add a photo to this gallery
Retrieved from "https://femalevillains.fandom.com/wiki/Allison_Cowley_(Psych)?oldid=204461"
Community content is available under CC-BY-SA unless otherwise noted.