Allison Clark (Stephanie Reibel) is the villainess from Monk episode 6.05, "Mr. Monk and the Birds and the Bees" (airdate August 10, 2007). She was introduced in the episode as the secretary of Rob Sherman, who was shown in the beginning of the episode killing his partner Dewey Wilson, before shooting and killing his wife, while framing Dewey for the murder. It was revealed later on that Allison is also Robert's mistress, and she colluded with Rob to cover up his role in his wife's murder.

Allison enlisted a young man named Clay to get close to Natalie's daughter, Julie, in order to retrieve a photo that Julie took with her boyfriend, Tim--which had Rob and Dewey in the background. The photo would disprove Rob's claim that he never met Dewey, and would implicate him in his wife's murder. It was assumed that Allison was arrested along with Rob, though her arrest wasn't shown on-screen. 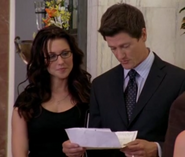 Add a photo to this gallery
Retrieved from "https://femalevillains.fandom.com/wiki/Allison_Clark_(Monk)?oldid=59335"
Community content is available under CC-BY-SA unless otherwise noted.