Posing as her twin sister, Jessica

Frame her sister for the murder (failed)

Very little was revealed regarding their backstory, only that there was a bit of a sibling rivalry, as Jessica revealed that Allie always stole her boyfriends. As the twins' wealthy father, Everett Banks, revealed, Allie was cut off financially, and she had since resented Jessica, feeling that she got everything all of their lives. Her jealousy led to Allie concocting a scheme to gain her father's wealth, beginning with acquiring the services of an actor named Harry Gordon, who was also Allie's lover.

Harry was sent by Allie to seduce Jessica into sleeping with him and taking drugs with him, while later videotaping their tryst and blackmailing Jessica with a demand of $70,000. The ruse had Harry being in cahoots with Jessica's soon-to-be ex-husband, lawyer Lars Klint, with the video being used to have their son, Danny, taken away from her. Jessica then went to Allie for help, but instead of giving her the money to pay Harry, they pull a trick on Harry; showing up dressed alike and making Harry believe that he targeted the wrong sister. Allie's help came with a price, she ordered Jessica to head to Mexico dressed as Allie, doing so on business. She gave Jessica a hat to deliver, though it was later revealed to have a video camera that would capture Jessica as Allie on video. Meanwhile, the evil Allie murdered Everett at his home, while creating an alibi for herself and framing Jessica for the crime.

Allie and Harry's collusion and relationship was revealed later on, and in the reading of the will, Jessica inherited her father's $10 million dollar estate. However, Allie would get everything if Jessica was actually convicted of her father's murder, and later in the film, Harry came to Jessica and confessed to his role in the setup and revealing Allie as the mastermind. Jessica paid Harry to help her expose her evil twin sister, and she played a recording of Harry's confession to Detective Sikes, or so she thought, as the video had Harry deceptively thanking Jessica for helping her frame Allie, convincing Sikes of Jessica's guilt leading to her arrest. Meanwhile, Harry ended up killed by Allie and her true co-conspirator and lover, who was later revealed to be Lars.

The pair's next phase in their plan included setting up Jessica's best friend, Madeline "Maddie" Waters, as a villainess conspiring with Allie, as Lars erased a tape that had evidence of the setup after Jessica told him about it. However, Jessica figured out everything by the film's climax and, with the help of Sikes, set up her sister and former husband. The climax had Maddie (as part of the plan) confronting Lars and demanding a payout for her silence in the conspiracy, while demanding to see Allie. After this, Allie later appeared to Lars, and it was at this point that their roles in Harry's murder were revealed, as Lars was convinced that Maddie had nothing on them. However, in a twist, Sikes entered Lars' office--with Allie, revealing that it was actually Jessica posing as her sister and that she tricked Lars in to revealing everything, much to Allie's anger. Sikes later handcuffed and arrested Allie, who revealed her jealousy of her sister, stating that she got everything. Jessica threw those words back at Allie, however, stating that Allie was just a greedy woman who put her through Hell and was now getting everything she deserved. 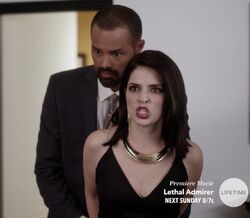 Allie arrested by Detective Sikes
Add a photo to this gallery
Retrieved from "https://femalevillains.fandom.com/wiki/Allie_Banks_(Twin_Betrayal)?oldid=211178"
Community content is available under CC-BY-SA unless otherwise noted.