Start a Wiki
watch 01:51
The Loop (TV)
Do you like this video?
Allie is a wrestling manager who works in TNA. She also competed under the name Cherry Bomb on the independent circuit.

Allie is the apprentice of the boss of the TNA Knockout's division, Maria Kanellis. She is a slightly ditzy, yet evil, woman who seems to take great pleasure in helping her boss out with her evil plans.

She debuted on the 17th May 2016 episode of Impact Wrestling where she introduced herself to Velvet Sky, before gleefully informing Velvet that if she lost her match later that night to Sienna that she would be fired. Which is exactly what happened.

The following week on the 24th May episode of Impact Wrestling, Allie accompanied Sienna to the ring for her match with Gail Kim. After the match Maria sneak attacked Gail and gave her a beating, much to the delight of the evil Allie, who laughed and cheered as she watched her boss attack Gail.

Impact Wrestling 17th May 2016: Gleefully informing Velvet Sky that she might be getting fired 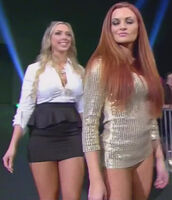 Impact Wrestling 24th May 2016: With her boss Maria Kanellis

Impact Wrestling 24th May 2016: The evil trio of Sienna, Maria and Allie

Impact Wrestling 24th May 2016: Allie and Sienna enjoying Maria's sneak attack on Gail Kim
Add a photo to this gallery
Retrieved from "https://femalevillains.fandom.com/wiki/Allie_(TNA)?oldid=98655"
Community content is available under CC-BY-SA unless otherwise noted.