Start a Wiki
watch 01:39
The Loop (TV)
Do you like this video?
Alison (Rena Sofer) is the villainess of "Grave Young Men", episode 1.20 of CSI: Miami (airdate April 14, 2003). She was a model and the girlfriend of Chuck Maxfield, who she claimed to have found dead in her bed after the two spent the night together.

During her interview with Detective Bernstein, Alison was shown attempting to entice the detective, and later tried to do the same to Tim "Speed" Speedle, only for him to brush her off due to picking up on her promiscuous nature. Alison continued trying to seduce Speed when he came over to her to swab her fingernails and photograph scratches on her chest, describing how she and Chuck had engaged in rough sex and even removing her top for the photographs.

Alison appeared later on to speak with Speed at the CSI headquarters, revealing that she was set to go to a photoshoot in St. Thomas the next day, leading Speed to question how she was able to go to work so soon after her boyfriend's death. Alison responded that she still needed to make a living, and additionally claimed she unknowingly rolled the already deceased Chuck onto his back during the night to explain why his body was moved post-mortem hours before she called 911. Speed refused Alison's request to be informed about his findings, and while he continued his investigation into Chuck's murder, Bernstein arrived with a revelation: Chuck was set to be married to another woman, revealing Alison as his mistress.

Chuck's saliva was found on one of the pillows from the bed in the form of a "death mask", indicating that Alison had smothered Chuck to death using the pillow. When interrogated by Speed, Alison claimed the saliva came from him bitinng on the pillow during their tryst and denied suffocating her boyfriend, but another piece of evidence ultimately proved Alison's guilt: an impression left on the pillow by one of her fingernail charms. In response to being cornered, the evil Alison once more attempted to seduce Speed while holding his hand, only for Speed to pull his hand away and chide the villainess for playing him. Alison went on to sarcastically claim Chuck was suffocated accidentally, with Speed debunking her claim and stating that she should've let Chuck get married; indicating Alison's motive for killing Chuck was anger at him for wanting to leave her for his fiancee. Speed then revealed that Bernstein had been watching from behind the glass, the two having made it appear that Speed interviewed her earlier without his presence to set a trap for her. Alison was subsequently handcuffed and arrested, after claiming that she couldn't believe Speed turned on her. 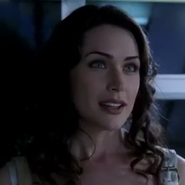 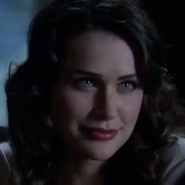 Alison's smirk during her villainous reveal
Add a photo to this gallery
Retrieved from "https://femalevillains.fandom.com/wiki/Alison_(CSI:_Miami)?oldid=204324"
Community content is available under CC-BY-SA unless otherwise noted.