Alisa Silvermane is a villainess from the TV series "Spider-Man: The Animated Series". She appeared in three 1995-1996 episodes "Tablet of Time", "Ravages of Time", and "Tombstone". She is voiced by Leigh-Allyn Baker.

Spider-Man managed to save Alisa but she shot him with a laser which caused Spider-Man to pass out. Sometime later Alisa arrived at Silvermane's headquarters and had Spider-Man chained to a wall. Soon after Tombstone also arrived and gave Silvermane the Tablet of Time. 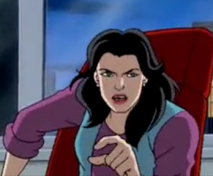 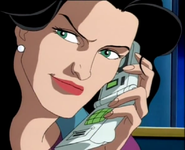 Add a photo to this gallery
Retrieved from "https://femalevillains.fandom.com/wiki/Alisa_Silvermane_(Spider-Man:_The_Animated_Series)?oldid=212309"
Community content is available under CC-BY-SA unless otherwise noted.