Start a Wiki
watch 01:48
The Loop (TV)
Do you like this video?
Alien Queen (Sybil Danning) is the main antagonist in the 1989 film, "The Phantom Empire".

The film has Denae Chambers (Susan Stokley) who hires Cort Eastman (Ross Hagen) and his female sidekick Eddy Colchilde (Dawn Wildsmith) to help locate a rumored lost world in the center of the earth that might have tons of priceless jewels.

The Alien Queen shows up aboard a space ship of Amazons.  She is dressed in black leather with big shoulder pads and a cut out for her rather large cleavage.  She rules the cave like world, and has the use of a giant robot.

In one scene of the film, the Alien Queen throws a spear at a stop-action dinosaur, killing it.  Michelle Baur appears as one of the bikini-clad "cave bunnies" that the Queen is in charge of.

At the end of the film, the team of adventurers escape her grasp and take off in her spaceship.  The Alien Queen goes back into the cave, where there is a large explosion.  It appears to kill the Alien Queen and her and her minions.  However, in the last scene, the monsters approach her and she has survived.  She draws her sword and snarls at the monsters saying "Now you're gonna be sorry". 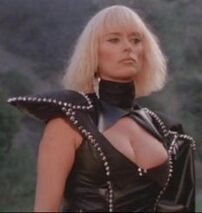 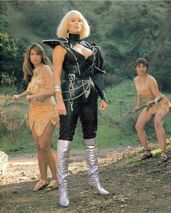 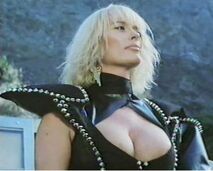 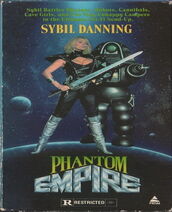 Add a photo to this gallery
Retrieved from "https://femalevillains.fandom.com/wiki/Alien_Queen_(The_Phantom_Empire)?oldid=121110"
Community content is available under CC-BY-SA unless otherwise noted.