Start a Wiki
watch 01:51
The Loop (TV)
Do you like this video?
Alice Walters (Julia Benson) is the hidden main villainess from the 2013 Lifetime film, Secret Liaison. She is the wife of U.S. Senate candidate Mark Carey, as well as Mark's campaign manager. When she learned that married computer techie Trevor Smith was blackmailing Mark with evidence of an affair, Alice had her henchman, Wayne, kill Trevor to prevent him from derailing the campaign; he did so by stealing the car owned by Brenda Simms (Trevor's girlfriend and also Mark's mistress) and then killing Trevor in a hit and run. Subsequently, Brenda was framed and arrested for her boyfriend's murder.

Alice also had Wayne murder Kelsey Pope because she got close to the truth about the true circumstances behind Trevor's death. Her villainous reveal came when Brenda's sister, Stephanie (the film's main protagonist), confronted Mark at a warehouse, believing that he was the mastermind behind the cover-up, only for both Alice and Wayne to appear with Brenda. Alice confronted Mark with everything she knew about his indiscretion, and stated that her motive for her crimes was to ensure that he would be elected. After Stephanie revealed that Trevor planted a camera in Mark's own laptop, Alice ordered Stephanie to delete the video, only for her to later press record while the villainess was distracted.

Now that the Simms sisters were the only loose ends remaining, the evil Alice planned to eliminate them as well, wanting to make it appear that Brenda "disappeared" and that Stephanie "committed suicide." Once Stephanie informed Alice that her rant and admission was recorded for the police to hear, Alice snatched the gun from Wayne's possession and decided to kill Stephanie herself. Mark attempted to take the gun from his villainous wife, only for one of the bullets to end up being fired, wounding him in the process. At the end of the film, Alice attempted to escape while tending to her injured husband, only to end up arrested. 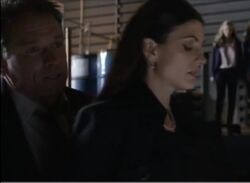 Alice being led away in handcuffs
Add a photo to this gallery
Retrieved from "https://femalevillains.fandom.com/wiki/Alice_Walters_(Secret_Liaison)?oldid=151750"
Community content is available under CC-BY-SA unless otherwise noted.