Start a Wiki
watch 01:51
The Loop (TV)
Do you like this video?
Alice Tuppany (Marjorie Monaghan) was the main villainess from JAG episode 3.07, "Against All Enemies" (airdate November 4, 1997). She is a seaman who is later revealed as a traitor who was selling military secrets to North Korea. It was also revealed that she killed the real Alice Tuppany a month prior to the episode's events and assumed her identity, using the name to send messages to North Korea regarding a missile test.

Harm confronted Alice with the facts that were revealed about her, only for the villainess to point a gun at him and hold him hostage. After her reveal, the evil Alice ordered Harm to pilot a Tomcat to North Korea, threatening him with not only the gun, but an unpinned grenade. However, due to North Korea not receving the traitoress' messages, their forces shot at the plane, killing Alice. Harm escaped in the ejector seat just as the grenade was dropped, blowing up the plane. 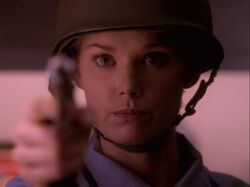 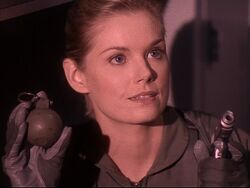 Add a photo to this gallery
Retrieved from "https://femalevillains.fandom.com/wiki/Alice_Tuppany_(JAG)?oldid=140551"
Community content is available under CC-BY-SA unless otherwise noted.