Alice Sands (née McFadden) came from a family of cops; her father was Detective Mark McFadden and two of her uncles were also cops. Hoping to get her father to pay attention to her, she excelled in everything during her high school years, and furthermore, Alice expected to finish at the top of the police academy she went to due to her family background. However, she was always topped by fellow trainee Jane Rizzoli, which upset her so much that she quit the academy; having only paid attention to his daughter during her time at said academy, he retracted it once again after she dropped out.

Alice became a criminal later in life, as she began running an extensive drug operation. She was eventually arrested for her crimes, leading to Mark callously disowning her. During her incarceration, she blamed all of her misfortune on Jane, spending years obsessively fuming over being second-best to her at the academy.

While she was behind bars, Alice decided to exact revenge on Jane for (in her mind) ruining her life. To do so, she enlisted the services of prison psychologist Joe Harris, who in turn sent one of his patients, Lianne Sampson, to burn down Jane's apartment. The unhinged criminal then had Lianne killed by rigging cocaine bags in her body to rupture, after which she ordered a hacker to wreck Jane's bank accounts, leading to her credit cards being declined. Following the deaths of Lianne and Harris, Alice was finally revealed as the mastermind behind it all at the end of the season's penultimate episode, "Bomb Voyage." The season finale, "A Shot in the Dark," saw the villainess driving towards Canada with her cellmate and girlfriend, Wendy Allen; the pair made a stopover in Maine. It was there that she killed a state trooper and drove away, leaving Wendy behind. She went to her business in New Brunswick, only to return at the end of the episode and perpetrate a shootout after Vince Korsak and his fiancée Kiki exchanged vows at their wedding. Alice managed to shoot Nina Holiday, only for her to survive.

In the seventh and final season opener, "Two Shots: Move Forward," Alice made her first physical appearance, as she was shown becoming infuriated over Jane's negative description of her. Later in the episode, Jane faced her former fellow trainee later after she and the rest of the Boston Police Department found Alice's tunnel hideout. Alice's other accomplices were unmasked as being a group of youths who were loyal to her; after her encounter with Jane, she gave her gun to one of the female youths and ordered her to shoot the rest of the group while she made her escape. She was arrested for the second time in the following episode, "Dangerous Curve Ahead," and as she was being interrogated, the evil Alice blasted Jane and directly accused her of taking what she believed was hers, with the latter replying by telling the former that she literally remembered nothing about her. Alice ended up being released due to a (perceived) lack of either evidence or probable cause, after which she resumed her twisted went on TV depicting herself as a victim of Jane's villainous harassment.

After Maura Isles and Kent Drake found proof of Alice being in Maine at the time of the state trooper's murder, Jane returned to Alice's deli hideout with Vince and Frankie. Knowing that she was being pursued and had finally been caught, Alice ran upstairs with a gun in her hand, with Jane walking up after figuring she was there. She saw an open window and initially thought that Alice had escaped, but in actuality, the deranged villainess locked herself in with Jane and held a young teenage boy hostage at gunpoint, threatening to kill him if Jane didn't lower her gun. Jane begged Alice to let her hostage go, only for Alice to respond by voicing her belief that she would still win because of how Jane would be depicted as a dirty cop who killed a "poor woman" in cold blood. In spite of Jane stating that she would not shoot her, Alice decided not to give her a choice. At that very moment, Alice tossed her hostage aside and pointed her gun at Jane, forcing her to shoot her dead. 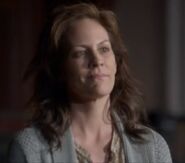 Alice's smirk during her hearing

Alice's corpse
Add a photo to this gallery
Retrieved from "https://femalevillains.fandom.com/wiki/Alice_Sands_(Rizzoli_%26_Isles)?oldid=201275"
Community content is available under CC-BY-SA unless otherwise noted.