Alice Ribbons (Rya Kihlstedt) is one of the secondary antagonists in the 1997 film, "Home Alone 3".

Alice was the sole female of a group of four thieves that work for a North Korean terrorist organization.  Her partners are Peter Beaupre (Olek Krupa), Earl Unger (David Thornton), and Burton Jernigan (Lenny von Dohlen).  We first see Alice and her group as they are retrieving a stolen military chip from a client. After receiving the chip, Alice and Beaupre place the chip in a remote-controlled toy car and head for the airport.

At the San Francisco airport, Alice has the toy car in a white bag and puts it through the aiport scanner.  However, while a person with a lot of jewelry is being dealt with, Mrs. Hess (Marian Seldes) takes the bag with the toy car by accident.  Alice relizes this when she takes a similar bag and feels it, finding it to be a bag with sourdough bread in it. Alice searches through the Dallas, Miami, New York, and Denver airport lounges, but is unable to find the toy car. After Earl and Burton also fail to find the toy car, Petr decides that the car must be on a plane, so they board a plane to Chicago. The four head on the plane to Chicago.  There, Alice waits for someone with a bag to reveal the car.  Mrs. Hesse places her bag down and takes off the robe, revealing the car.  Alice calls out to Beaupre, who calls out to Jernigan and Unger.  Alice and the gang try to follow Mrs. Hess through the airport.  Alice discovers Mrs. Hess outside the entrance, getting into a cab, but they are too late as she has already left.

After Jernigan snaps a picture of the number on the cab, Alice and them go to the cab depot and wait for the cab to show up.  After it eventually arrives, Unger and Jernigan interrogate the driver and find out that Mrs. Hess, the woman he was driving, lives in North Devon Park, Washington Street in an "old, tudor like place with Christmas lights, a wreath on the door, a Christmas tree at the end of the driveway and the driveway is the only one that hasn't been shoveled". They arrive and Alice checks out the houses, saying that all of them are all almost like the cab driver described, after which Peter decides that they should search them all. Alice gets her gang a house in the neighborhood after fooling a realtro with a disguise. For the next couple of days, the four search for the toy car.  Alice is assigned a dog (despite her hating dogs) stolen from a neighbor.  She mainly patrols the neighborhood along with Earl and Burton.

All the while, the four are unaware that they are being watched by neighborhood kid, Alex Pruitt (Alex D. Linz).  After Alex calls the cops and they fail to catch them, Alice wonders what went wrong with the burglar alarm and figures that there could be a watcher in the neighborhood. The second time around, Alice is jogging with a fake baby in a stroller when she spots the cops and tells Peter (who is searching another house) to abort the mission.

For the third attempt, Alex uses the toy car with a camera taped on the top to catch Peter in the act.  It manages to go past the patrolling Alice and Unger.  After Peter eventually finds the toy car, he summons Alice and the gang to the house where he is.  Alice comes up to Peter and asks what happened and he says that a woman is in the house and gives her the toy car before heading back inside.  Alice tries to open the toy car to get the chip, but Alex starts the car and one of the tires hits her in the chin. Alice runs into the house and tells Peter that she lost the car, much to his annoyance.

As the chase for the car ensues, Alice hides beneath a bunch of trees and bushes in an alley behind a house.  She soon spots the car heading into a hedge and goes after it.  She then jumps over the hedge, only to run head-first into Peter in mid-air who also was pursuing the car in her direction. The crooks then call it a day and go back to their house.  While they're having Chinese food, Alice realizes that the person who was controlling the car and who was calling the police is a kid. During the night, Alice calls Alex's mom on the phone and pretends to ask her about her "son Bradley's" missing toy car.  Before Alex cuts off the conversation, his mom tells her that he had gotten the car from Mrs. Hess from across the street.  Alice proclaims to her fellow crooks, "We have it". Thanks to Jernigan intercepting Alex's mom's phone call, Alice answers her and claims that she disconnected her and that Bradley must've misplaced the toy car. That same night, Alice and the other crooks prepare to get the car at Alex's house.

The next day, Alice and the stolen dog (Rollie) head to the house.  Alex blows a dog whistle which Rollie hears and causes him to go over to the house.  Alice turns on the fiber optics in her glasses which turns on a camera which is operated from the thieves' car.

Alice rings the doorbell a few times, but no one answers (mostly due to the fact that Alex cuts the doorbell wire).  All the while, Alex goes to opposite sides of the house and blows the dog whistle which wraps the collar around Alice's legs.  When Alex blows the whistle one last time, Rollie runs to the back of the house, dragging Alice on her back through the bushes which knocks off her hat and glasses until she breaks free of the leash and Rollie runs off.  Irritated, Alice goes back to get her hat.  She bends down, only for her pants to rip open.  She then asks for assistance from being, 'exposed', and Jernigan tells not to draw attention to herself.  She puts her hat and glasses back on and walks away, after which the other crooks pick her up and prepare to come back after the snowstorm hits.

After the snowstorm, Alice and the others go back to the house.  Alice tells Unger to block up the street so no one will come in. Soon, Alice and Beaupre meet Mrs. Hess (who was the very reason they were in Chicago in the first place).  Alice pretends that Beaupre is her husband and tells her that the two of them had just moved into the neighborhood.  After Beaupre lies some more, Alice and Mrs. Hess go into the garage.  Alice closes the garage door and gets the drop on her, then straps Mrs. Hess to a lawn chair with duct tape, and also seals her mouth shut with the same tape. After tying up and then gagging her, Alice tells Mrs. Hess that she and the other crooks plan to do away with Alix.  Alice kisses Mrs. Hess in the middle of her forehead and exits out the back door and leaves it open, telling Mrs. Hess that she could use some 'fresh air', meaning an ubly death by hypothermia.  Alice meets up with Peter and Unger who are having trouble with Alex's traps.  She pokes fun at them and argues with Unger.  After this, Peter says that he will go in the front of the house and then tells Unger to go to the north side and Alice to go to the south side.

Alice walks towards a gate at the side of the house.  She tries to open it, but is unable to.  When she tries to open in from the outher side, her hand gets caught in industrial strength glue.  She then goes over the gate and falls into wet mud.  Losing her balance she lands on her knees and triggers a cord which causes a plant pot to fall from the roof and knock her on the head, causing her to faint in the mud.  After getting up, she tries to walk through the mud, but falls back, tripping another cord and causing another pot to fall on her face.

When she gets to the back door, she arrives at the veranda and notices that Alex may have set a trap for her on the stairs.  Realizing this, she swings on the banisters, thinking she has outwitted the kid, but then the banisters split and Alice falls onto the stairs, injuring her back.  After cracking her spine back in place, she somersaults and back-flips onto the veranda.  Proud of her work, she turns and as she goes to open the door, the floor tilts and hits her in the back of the head before she falls down into the furnace.  Peter hears and goes on the veranda to look for her, but he falls and lands on top of Alice.  In the furnace, Alice and Beaupre finds Jernigan in the bathroom.  Alice notices his hair (earlier being cut by a lawnmower) to which she thinks he has gotten a haircut.

Alice and Jernigan checks the bedroom, only to find a monkey doll laying on it, Jernigan chuckles and Alice tells him to shut up.  Alice sees Alex's pet rat Doris sitting on a hole on Jernigan's pants, she screams and tells Jernigan not to move and keep his voice down. She swings her crowbar at Doris, who dodges, and hits Jernigan in the crotch instead, causing him to let out a high pitched scream.  Jernigan tells her that she smacked him in the crotch, which Alice tells him that if he changed his shorts once in a while that he would not have rats in his pants.

The four robbers then begin to follow Alex to the attic.  She, Earl and Jernigan sees a trampoline below and she orders Jernigan to jump onto it an nearly pushes him off, at which point he tells her not to push him or he will fall.  Earl and Jernigan jump into the trampoline, but it gives way and they both fall into the swimming pool.  Alex triggers the dumbwaiter to start moving and Alice opens it and for a strange reason, decides to sit in it; she fails to notice that the floor was removed and falls all the way down to the basement, lamenting, "Ouch." (Beaupre gets blown up in a doghouse by Alex's pet parrot.) Later she is carried away by the FBI and arrested along with the rest of her gang.

In jail, Alice, now having got the chicken pox from Alex, has her picture taken with the other crooks. 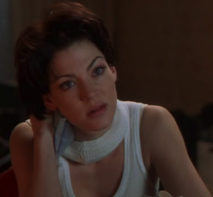 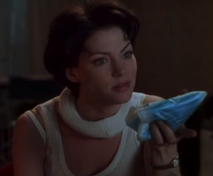 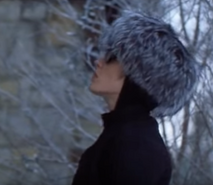 Sexy Alice approaches the house with a dog

Dog's leash gets wrapped around her legs

Finally the ride ends with Alice flat on her face

Alice bends over to retrieve her lost hat, splitting her pants in the process. 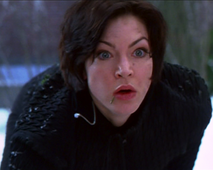 She inspects the damage. 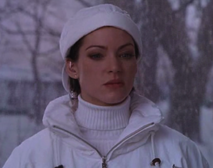 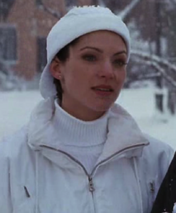 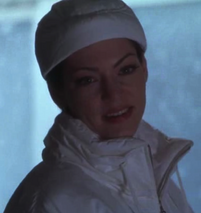 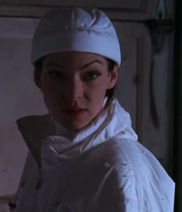 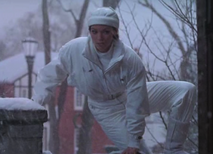 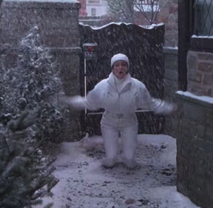 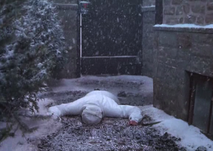 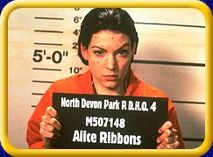 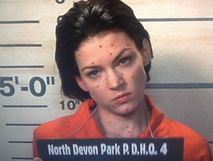 Add a photo to this gallery
Retrieved from "https://femalevillains.fandom.com/wiki/Alice_Ribbons_(Home_Alone_3)?oldid=203885"
Community content is available under CC-BY-SA unless otherwise noted.