Start a Wiki
watch 01:51
The Loop (TV)
Do you like this video?
Alice McLane aka Jane Prescott was the villainess of The Monster Doll, a story from Forbidden Worlds #1 (July-August 1951). She first met scientist Dickson Prescott at a robot museum, introducing herself as Jane Crothers. The pair quickly bonded over their shared interest in robots, leading to the two getting married.

But as revealed in the story's climax, Jane's real name was Alice McLane, and was sentenced to death by hanging years prior for murder. Mad scientist Julian Bulmere, however, took Alice's corpse from the noose and later brought her back to life as a cyborg-esque robot, doing so to have a woman who would love him and stay with him forever (giving her the name Amy Matthews). But eventually, Alice began fighting with Julian, eventually killing him and burning all of his research and fleeing the scene. It was also revealed that Alice then began seducing men following her escape, eventually killing them when they became a danger to her secret.

In the present events, Dickson was contacted by his old friend Alan MacCampbell for help in searching for the cyborg, leaving "Jane" with his assistant Sue Jackson. Despite Dickson's claims that she and Sue would get along well, Alice confronted Sue the next day, accusing Sue of being in love with Dickson and of convincing him to go meet with Alan to keep them apart. (with Sue later admitting in private that she had fallen in love with Dickson). When Dickson returned home after failing to find the cyborg, Alice asked for Dickson to fire Sue, with Sue agreeing to leave due to not being able to confess her feelings for Dickson and how they'd cause the conflict between her and Alice.

After Dickson left for a conference at the cybernetics foundation, Alice revealed that she'd heard Sue tell Dickson she would leave first thing in the morning and asked her to instead leave before Dickson returned home. Enraged, Sue blasted Alice as cold and heartless, even comparing to a robot. Furious at the comparison, Alice threatened to kill Sue and approached her menacingly, only to instead fall down the stairs. After calling Patrick to tell him about what happened, Sue performed X-rays on the unconscious Alice, discovering through the results Alice's status as a robot. But as Sue marvelled at the results, the evil Alice snuck up behind Sue and strangled her to death. When Dickson returned home, Alice claimed that Sue had been murdered by an intruder.

But Dickson discovered the X-rays in the nearby crucible, Alice having attempted to burn them to cover her secret. After Dickson saw the remnants of the X-rays and discovered that Alice was the robot, the villainess approached her husband with a knife, revealing that she had to kill him like her previous lovers while claiming that she had loved him more than the others. When Dickson blasted Alice for the murders she'd committed, Alice claimed that she had to kill so she could keep her secret covered and continue living. But as Alice prepared to kill Dickson, he threw a bottle of chemicals at Alice, resulting in the cyborg burning to death as she pleaded not to be destroyed. 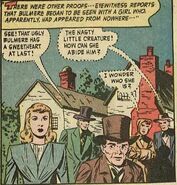 Alice after being revived by Julian Bulmere 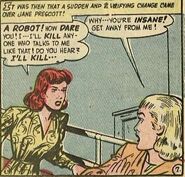 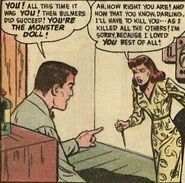 Alice threatening Dickson with a knife

Alice's demise
Add a photo to this gallery
Retrieved from "https://femalevillains.fandom.com/wiki/Alice_McLane_(The_Monster_Doll)?oldid=156880"
Community content is available under CC-BY-SA unless otherwise noted.