Alice (Grace Phipps) is a villainess from the 2015 horror-comedy anthology, Tales of Halloween. She appears as the main antagonist of the segment called "The Weak and the Wicked".

Alice, along with fellow bullies Bart and Isaac, torture a kid after trick-or-treating, and are interrupted by a teenager in a devil costume. The teenager hands Alice a drawing of a demon and warns Alice that the Demon will "spill the blood of the wicked where the wicked have harmed the weak". Alice dismisses the picture, and begins to chase the teenager away with the other bullies to the other side of the city, where the teenager stops by a burnt-down trailer car. We see a flashback to when Alice, Bart, and Isaac were kids, setting a house on fire. We learn that this house belonged to the teenager, and his parents were killed in the fire.

Back to present day, the bullies show up and proceed to beat up the teenager and prepare to light him on fire. Suddenly, Bart and Isaac are pulled away by an unseen force. When Alice turns around, she sees a creature known as the Demon of All Hallow's Eve, which resembles the costume that the teenager was wearing at the beginning of the segment. The camera switches back to the teenager as we hear Alice scream, showering the teenager with blood. The teenager smiles in satisfaction with having gotten revenge. 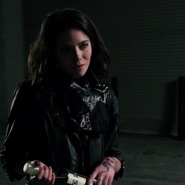 Add a photo to this gallery
Retrieved from "https://femalevillains.fandom.com/wiki/Alice_(Tales_of_Halloween)?oldid=216069"
Community content is available under CC-BY-SA unless otherwise noted.