Start a Wiki
watch 01:51
The Loop (TV)
Do you like this video?
Ali Weiss (Bre Blair) is the main villainess from "An Inconvenient Ruth," episode 2.15 of Lethal Weapon (airdate February 6, 2018). She is the wife of Herb Weiss, who ran a cloud based security firm.

The couple was shown in the beginning of the episode at a jewelry store, which was being robbed. After Riggs and Murtaugh later save Ali from being killed by a car bomb, she is informed that Herb may have hired someone to kill her for the insurance money, with Herb facing bankruptcy as a motive. Ali and Herb are both abducted and taken to a secluded cabin, where a pair of henchmen plan to burn down the cabin. Riggs hears Ali's call for help and runs to her rescue, but once she finds her tied up and (more importantly) gagged, Riggs figured out that Ali was the true mastermind.

Ali had set up everything: the heist, the car bomb, even the murders of her family lawyer and the guard who was protecting her from Herb. She also set up her own kidnapping, with Herb's being genuine, as he was the real target. She attempted to pin the kidnapping on Herb once Riggs approached her, only for Riggs to wonder how she could yell for help if she was gagged. In response to Riggs' question regarding her motive, whether it was for the money or pure hatred of her husband, Ali revealed her true heel persona by stating that it was both.

Shortly after her reveal, the evil Ali fired gunshots at Riggs, only to strike and kill one of her henchmen. The villainess escaped and continued firing at Riggs, who later grabbed a shotgun and fired a non-fatal shot at Ali. It can be assumed that Ali was arrested (off-screen) for the attempt to kill her husband. 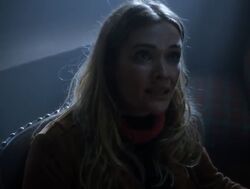 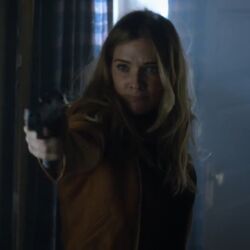 Add a photo to this gallery
Retrieved from "https://femalevillains.fandom.com/wiki/Ali_Weiss_(Lethal_Weapon)?oldid=93698"
Community content is available under CC-BY-SA unless otherwise noted.