Start a Wiki
watch 01:48
The Loop (TV)
Do you like this video?
Alexis "Lexi" Sawyer, aka Alexis Boyer (Jillian Murray) is the main villainess from the 2018 Lifetime film, A Dangerous Date (alternately titled, Stepmother; airdate April 14, 2018).

The backstory of Alexis Boyer revealed that her parents had an unhappy marriage due to her mother's constant affairs. Enraged at her mother's betrayal, Alexis bludgeoned her mother to death, leaving her father despondent and angry over her actions. Since then, Alexis had dreams of having the perfect family; dreams that later became a twisted obsession.

While working as a nurse as a hospital, she tended to a woman named Molly, who was terminally ill. Molly was visited by her husband, Peter, and their young daughter, Julie, and upon seeing Peter, she became smitten to the point where she targeted him as her ideal husband. Molly actually gave Alexis some motherly advice, telling her to go after what she wanted. In a cruel and ironic twist, Alexis (who was called "Lexi" by Molly) took Molly's advice and stated to her that she wanted Peter, right before she smothered her with a pillow.

Following Molly's murder, Lexi continued her obsession over Peter, which was shown early in the film when she spotted him with Julie at a restaurant. She seduced a man named Ian in an attempt to get Peter's attention, and after overhearing Julie tell Peter to start dating again and suggest an online dating site, Lexi created a profile for herself online, which Peter answered. Peter and Lexi met for the first time and hit it off instantly, leading to a sexual encounter. Julie is also happy for her father and Lexi, but as the film progressed, Lexi's psychotic nature began to surface, as well as her deception, as Julie learned that (despite Lexi's claims) Lexi doesn't work at a hospital.

Lexi later becomes nasty to Julie, even going as far as slapping her when Julie confronted her, while still manipulating Peter into believing that Julie was jealous of Lexi. Julie later went to the home of Lexi's father, posing as a friend of hers, and it was there that Lexi's obsession with Peter was revealed, as along with a wedding dress, photos of Peter were all over the walls of her room. After Lexi went the house and was told about her "friend" visiting, she snapped at her father and later accused him of being jealous of her having a man in her life, after which she stabbed her father to death with a shard of glass.

In the film's climax, Julie learned from her boyfriend, Billy (whose brother is a cop), that Lexi had a rap sheet and that her real name was Alexis Boyer. She later learned that Lexi had killed her mother, and it was at that moment that the evil Lexi appeared from behind and knocked out Julie with chloroform, before tying her up to a chair. After this, the psychotic villainess revealed that she killed her own mother due to her constant affairs, while stating to Julie that she and Peter needed her in their lives. Lexi later revealed to Julie that she murdered Molly, Julie's mother, years ago, all the while brandishing a knife at Julie during her revelations. Julie had dialed Peter's phone before Lexi's confessions, and once Peter arrived home and rushed to his daughter's aid, he was knocked out with a bat by Lexi. She later went after Peter with the knife, stabbing him in the arm before preparing to kill him. But before she could do so, Julie freed herself and stopped Lexi, using her scarf to strangle Lexi unconscious.

The film's final scenes revealed that Lexi survived and was in a psychiatric hospital, with her hands strapped to her hospital bed. She later sees her doctor and begins making a seductive pass at him, indicating that she has found her next target.

Alexis brandishing her knife at Julie 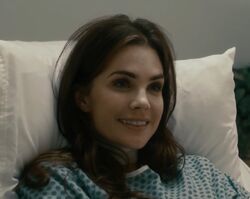 Alexis in a psychiatric hospital
Add a photo to this gallery
Retrieved from "https://femalevillains.fandom.com/wiki/Alexis_Sawyer_(A_Dangerous_Date)?oldid=178773"
Community content is available under CC-BY-SA unless otherwise noted.