Alexia (Daisy Head) was an antagonist in the 2016 action fantasy "Underworld: Blood Wars".

Alexia was a Vampire who served as a Death Dealer in the Easter Coven following the Purges. She was also a traitor to the Vampire Coven since she was the lover of the Lycan leader Marius.

Unknown to the rest of the Eastern Coven, Alexia was the lover of the Lycan leader, Marius, and planned to betray them for him. Alexia was sent to find Selene and David and bring them to the Eastern Coven after the Vampire Council offered clemency to Selene. Following Selene and David's flight for the Nordic Coven after being framed for the murder of several Death Dealers, Alexia was tasked with finding them by Semira. However, after she found evidence of their travel to the Nordic Coven, Alexia contacted Marius to tell him where to find them, before traveling to the Nordic Coven's stronghold herself.

Later, during a duel between Marius and Selene, Alexia revealed her true allegiance by plunging her sword into the back of her fellow Vampire. To discover if Selene was telling the truth about not knowing the whereabouts of her daughter, Alexia licked Selene's blood off her sword, gaining access to Selene's blood memories. She then revealed to an enraged Marius that Selene was indeed telling the truth. Marius ordered her to return to the Eastern Coven, saying the Lycans must attack as soon as possible and that she knows what she must do.

Upon her return to the Eastern Coven, Alexia snapped the neck of the Death Dealer overseeing the stronghold's surveillance cameras and proceeded to shut down the Coven's defences, allowing the Lycans easy access. She then gave a report on the events at the stronghold of the Nordic Coven to Semira. Unfortunately for Alexia, Semira slashed her across the throat with a hidden knife, mortally wounding her. As she was bleeding out, Semira revealed to her that she had always known about her relationship with Marius and used her for her own purposes.

Despite being a Death Dealer, Alexia appeared to be sympathetic to Lycans, even taking their leader, Marius, as her lover. Alexia viewed Semira's blind ambition and lust for power as a threat to both Lycans and Vampires and seemed to truly believe that siding with Marius would bring peace. Alexia could be also ruthless, stabbing Selene in the back, snapping a fellow Death Dealer's neck without hesitation and appearing to feel little remorse over the deaths of any Vampires who got in the Lycans' way, but was not entirely unfeeling: she cared a great deal for Marius and came across as being a somewhat emotional woman, who tended to wear her heart on her sleeve. She displayed a certain level of cunning in being able to keep the secret of her relationship with Marius, though she was not clever enough to outsmart Semira.

Alexia was in love with Marius, despite the fact he was a Lycan and was extremely devoted to him. It is unclear when and how the relationship began, though it is possible, given Alexia's comments, that she sought out Marius in an attempt to curb the ambitions of Semira, which Alexia saw as a threat, and the relationship developed from there. Alexia willingly betrayed her Coven - resulting in the deaths of several Vampires - to help Marius and saved him from Selene by stabbing her in the back, proving she would go to almost any lengths to please her lover and help him further his goals. Alexia appeared to be the more submissive one in the relationship, obeying Marius without question and putting up with him being rather rough with her at times, though her love for him was unwavering. Unfortunately, Alexia's devotion to Marius ultimately leads to her downfall.

Alexia appeared to despise Semira, viewing her lust for power and sometimes unscrupulous means of attaining it, and her obsession with waging war against the Lycans, as a threat to the Coven. Alexia sought Marius's help to bring Semira down, believing that with her gone peace could be obtained. Alexia feigned loyalty to Semira, serving her devotedly and doing whatever she asked her of her. However, Alexia wasn't quite as cunning in deceiving Semira as she believed and underestimated the older Vampire, who caught Alexia off-guard and killed her, revealing she had known of her treachery all along. 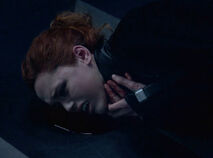 Add a photo to this gallery
Retrieved from "https://femalevillains.fandom.com/wiki/Alexia_(Underworld:_Blood_Wars)?oldid=145965"
Community content is available under CC-BY-SA unless otherwise noted.