Alexandra Cabot is the comic relief villain in the "Josie and the Pussycats" comic books, cartoon series, and movie.  The comic book ran in publication from 1963-1982.  The Saturday morning cartoon was produced in 1970-1971.

Jealous of Josie McCoy because she is the leader of the band when Alexandra thinks she should be the lead [despite her having no talent] and, because the male lead, Alan, is attracted to Josie, Alexandra, with her sidekick, Sebastian the cat, try to foil Josie, but their plans always backfire!

Alexandra has black hair with a white lightning-bolt shaped stripe running through the middle of it, giving her ponytail a slight impression of a skunk's tail. In contrast to the good-natured girls in the Pussycats and despite being very attractive and unbearably beautiful like them, Alexandra is cynical, hateful, mean, offensive, rude, envious, scheming and self-centered. She is insanely jealous of the Pussycats, especially Josie, about whom she never has a kind word. Despite having no vocal or musical talent at all, although being quite a good dancer, Alexandra desperately wants to be a star; her conditions for joining the Pussycats were that she be made the lead and that the band be renamed Alexandra's Cool Time Cats. Her absence of musical talent is on display at the end of the episode "Swap Plot Flop", when she gets the chance to front her own act; Alexander is particularly distressed by the crazy performance. Alexandra has an enormous crush on Alan M., and often tries to steal him away from Josie. In the comics, although she is not particularly fond of her brother, Alexandra often joins forces with him to separate Alan M. and Josie, which would benefit both siblings, since Alexander is interested in Josie. Alexandra's personality in the cartoon is largely unchanged. Sebastian is a tuxedo cat, and Alexandra's sidekick. In the comics, Sebastian is the reincarnation of Sebastian Cabot, a witchcraft-practicing ancestor of the Cabot family. Alexandra finds that, by holding Sebastian in her arms, she can cast powerful magic spells (Alexandra and Sebastian's bond is represented in that they both have a matching white stripe in their middle of their hair/fur). However, this plot device was seldom used and was eventually dropped. Alexandra was later shown to be able to cast spells on her own. In the cartoon, Alexandra and Sebastian do not have magic powers but they still have their white stripes. Alexandra's voice in the cartoons is provided by former Mouseketeer Sherry Alberoni, while Don Messick supplies the meows, screams, and Muttley-esque snickers for Sebastian. 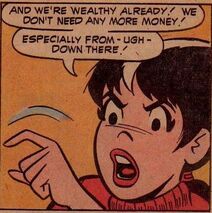 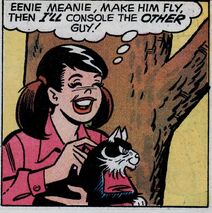 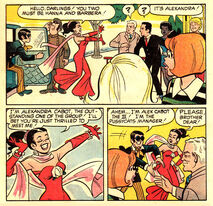 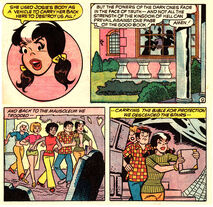 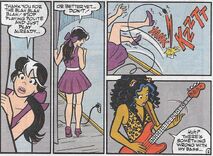 In the cartoon series, Alexandra is not a witch..but jealous. Alexandra is the only girl who is not a Pussycat band member of the Josie’s trio but still a member of the group.  She is identified by her long black pony-tailed hair with a white streak through the center of it, possibly suggesting a skunk or polecat. Alexandra is Intelligent but also selfish, generally mean-tempered, grouchy and bullying, Alexandra is Alexander's twin sister. She appears to have no identifiable role with the band nor any reason for associating with it, other than the fact that she is Alexander's sister and ally who tries to be the leader, although she can be quite a good dancer but with some comical results. She is constantly bitter and jealous of the band's success without her, believing that she should be "the real star of the band", and constantly plots to steal the spotlight (and Alan's affections) from Josie, only to have every scheme fail in humiliating fashion, which she is considered as a fun show stealer. Despite her jealousy, she remains very loyal and quite caring to the group and will usually fight with them against villains, using her brash personality to intimidate the opposition. In two episodes, however, she departs from her villionous role: In "Never Mind a Master Mind" Contrary to her usual comic relief role, Alexandra uses the anti-gravity ray gun to save her friends from Mastermind. In "Plateau of the Apes Plot", her brother Alexander angers her so much with his bragging about his "heroics" when he was turned into a ape, she shuts him up with a banana! A second season of the series was introduced as "Joise and the Pussycats in Outher Space" {In this "Lost in Space" version the gang is trapped in Outer space and into even more crazy adventures]. The last cartoon episode feauturing " Josie and the Pussycats" gang guest starring as themselves on a episode of "The New Scooby Doo Movies" ["The Huanted Houseboat"]. Ironically after "Josie" series ended, reportably there was an attempt to place for four of the "Josie and the Pussycats" characthers [Melody, Alexander, Alexandra and Sebastian cat] in a new cartoon series "Laff-a-Lympics" as members of a sports team but it did not work out. 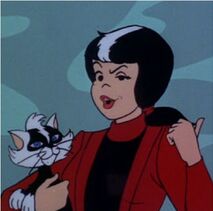 Retrieved from "https://femalevillains.fandom.com/wiki/Alexandra_Cabot_(Josie_and_the_Pussycats)?oldid=223012"
Community content is available under CC-BY-SA unless otherwise noted.