Alexandra, played by the beautiful actress Stacie Randall, is the psycho ex girlfriend in the 1994 movie, Ghoulies IV, which is the final film in the four part series.

Alexandra is an ex girlfriend of Jonathan Graves (Peter Lapis) who is the main character in the series. When the two were an item, they began dabbling with evil magic and other activities. She eventually attempted to murder Jonathan, and she was put away in a mental asylum.

Alex as she is also called, has broken out of a mental health facility she was in. She begins her killing spree by killing the guards inside a museum. She opens a box containing the jewel to set the demon "Faust" free. Faust happens to be Jonathan's alter ego who possessed him in the original movie. Faust wants to escape the dark dimension he's in by possessing Jonathan once more. However, in order to do that, he needs the amulet necklace. Alexandra offers up the guards for a sacrifice. However, as Alexandra is about to hand him the necklace, she accidentally steps on the symbol and Faust is sent back to the Netherworld and the jewel is lost. Alexandra kills two more people and summons Faust once more, who gives her a chance to redeem herself. This time she needs to find the second jewel or amulet that Jonathan possesses.

While this is happening, a couple of evil dwarves escape from the Faust's dimension and they too intend to get the necklace. The dwarves provide some comic relief throughout the film as they pop in and out and botch their attempts to get the amulet.

Jonathan is now a Los Angeles police detective, and this has a sort of three way relationship going on. First there is Alexandra, the ex-girlfriend who has gone psycho and wants him dead. Second there is Jonathan's police force captain Kate (Barbara Alyn Woods), who is also an ex girlfriend. She wants to get back together with Jonathan. Third, there is his current girlfriend Jeanine (Raquel Krelle), who is also a hooker. These three have a way of getting in the way of each other.

Alexandra attempts to steal the amulet from Jonathan's apartment. While there she gets sprayed int he face by the Ghoulies, and while chasing them gets knocked down by the janitor. Later she abducts a man and Faust turns the man into something from the Netherworld to help her find the jewel. Alexandra then abducts Jeanine, Jonathan's hooker girlfriend, by grabbing her from behind and chloroforming her. When she passes out, Alexandra lifts her over her shoulder and walks off with Jeanine draped like a burlap sack, her long sexy legs dangling behind. The girlfriend wears an extremely short black skirt and an orange colored crop top. She is extremely busty and sexy, and plays the damsel in distress extremely well. A little back story here, Jeanine has just come from Jonathan's apartment after stealing the bright colored amulet from Jonathan's neck while he was sleeping. Therefore, you now know why Alexandra has abducted her. Also we have just witnessed a very sexy confrontation between Kate and Jeanine. Kate busted into Jeanine's apartment looking for Jonathan. Jeanine exchanges unpleasantries with her, and storms off, still wearing the amulet.

Jonathan and Kate pursue Alexandra, who has arrived at the asylum. It is here that she has Jeanine strapped to a stone table and is performing the ritual to bring back Faust. Jonathan arrives at the scene as the ceremony is being completed, and Jonathan and Faust exchange places. When Kate arrives she attempts to stop Alexandra. Alex attempts to throw a ninja star at Kate, but Kate shoots it out of her hand. Faust then attempts to kill Jeanine, his sacrifice, but Kate, believing its Jonathan stops him.The Ghoulies take the jewel and a brief battle ensues between them and Alexandra. Then they toss the jewel to Kate who sends Alexandra back to the Netherworld. Alexandra then sends Faust back with her and Jonathan is set free while the Ghoulies also go back to the Netherworld as well. 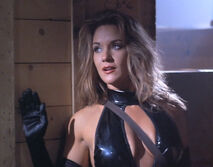 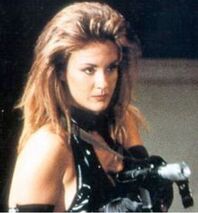 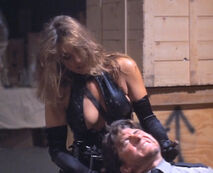 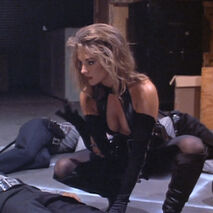 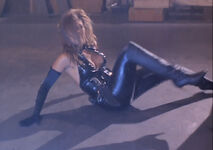 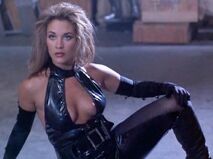 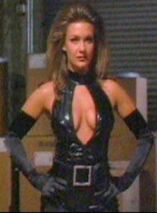 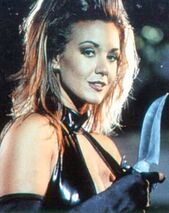 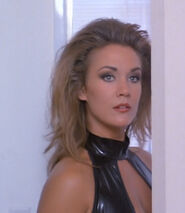 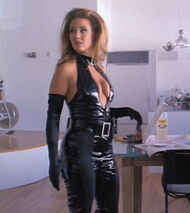 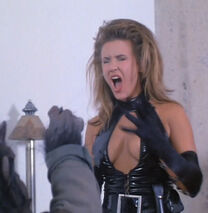 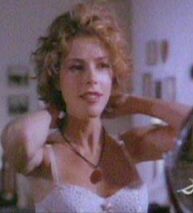 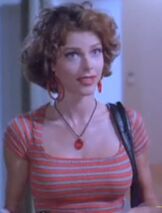 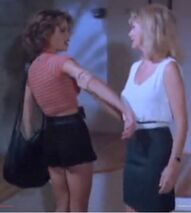 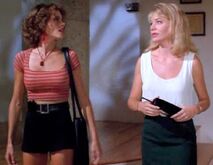 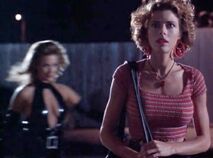 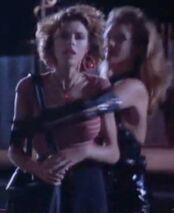 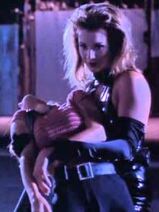 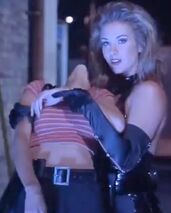 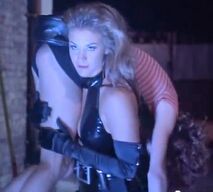 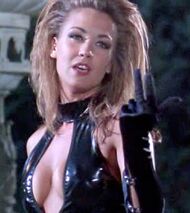 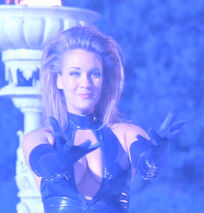 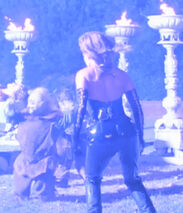 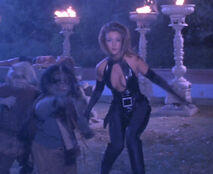 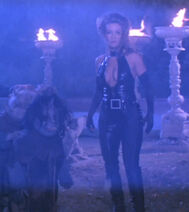 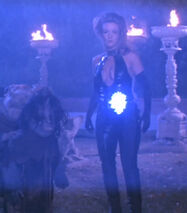 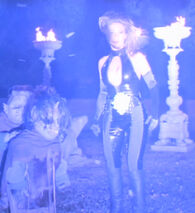 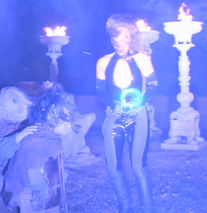 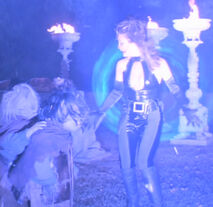 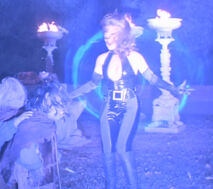 Add a photo to this gallery
Retrieved from "https://femalevillains.fandom.com/wiki/Alexandra_(Ghoulies_IV)?oldid=190512"
Community content is available under CC-BY-SA unless otherwise noted.