Start a Wiki
watch 01:51
The Loop (TV)
Do you like this video?
Alexa Bliss is a professional wrestler and manager currently competing in WWE as a villainess.

Alexa debuted on NXT in 2014, and after a year as a babyface, Alexa began turning heel on the April 30, 2015 episode of NXT, doing so in a backstage segment with Carmella. After confronting Carmella, Alexa was seen with reigning NXT Tag Team Champions Blake and Murphy, who were feuding with Carmella's associates, Enzo Amore and Big Cass. Two weeks later on the May 13 episode of NXT, Alexa defeated Carmella in a grudge match, with the win coming after Blake and Murphy distracted Carmella.

At NXT Takeover:  Unstoppable on May 20, Alexa turned villainous during Blake and Murphy's NXT Tag Team Championship defense against Enzo and Big Cass. During the match, the evil Alexa attacked Carmella at ringside and did the same to Enzo to allow the tag champs to retain, cementing her alliance with Blake and Murphy. In later weeks, Alexa would constantly get involved in Blake and Murphy's matches, and would attack their opponents after they were defeated. She later engaged in a feud with Blue Pants, after she prevented Alexa's interference at NXT Takeover: Brooklyn, leading to the Vaudevillains capturing the tag titles. Alexa defeated Blue Pants in a grudge match on NXT two weeks later. Alexa later chased the NXT Women's Championship, which was held by Bayley at the time. After weeks of antagonizing Bayley, Alexa received her title opportunity on the November 18, 2015 edition of NXT, but she was defeated by Bayley.

After months of competing on NXT, Alexa was drafted to the SmackDown brand on July 19, as part of the returning brand split. In her first main roster match on the program, Alexa defeated Becky Lynch in singles action. Her main roster PPV debut came at SummerSlam, as she, Natalya, and the returning Nikki Bella defeated Carmella, Becky Lynch, and Naomi. Alexa competed in a six-pack challenge match at Backlash to crown the first ever SmackDown Women's Champion; the match was won by Lynch. In the months that followed, Alexa continued feuding with Lynch over the title, which Alexa finally won at TLC in a Tables Match.

Alexa's feud with Becky continued in December, when a week after intentionally getting counted out in a title rematch, she was defeated by a woman known as La Luchadora, who was revealed as Becky Lynch. On December 27, Alexa successfully defended the title against Lynch in another rematch, with the win coming after Lynch was attacked by a villainess dressed as La Luchadora. On the following week, Lynch competed against the villainous La Luchadora, but during the match, the evil Alexa entered the ring dressed as the masked villainess and attacked Lynch after switching with her cohort. Despite this, Lynch won, but after the match, Alexa and La Luchadora attacked Lynch. On January 17, 2017, Alexa defeated Becky in a Steel Cage match for the title after La Luchadora again interfered. La Luchadora was unmasked by Becky and revealed as the evil Mickie James, who aligned with Alexa in attacking Lynch.

Alexa was moved to RAW during the Superstar Shake-Up, along with former ally Mickie James. A week later, Alexa defeated Mickie James, Sasha Banks, and Nia Jax to become the #1 Contender for Bayley's RAW Women's Championship. Alexa's title shot came at Payback on April 30; defeating Bayley to capture the title. In May she found she had to defend her title against the former champion Bayley yet again, and during this time she discovered a fondness for kendo sticks. More specifically she discovered how much she enjoyed hitting other women with them, and admitted in an interview that "the sound of the stick striking her flesh makes me salivate". At Extreme Rules 2017, Alexa made quick work of Bayley, dominating her with a kendo stick to retain the RAW Women's Championship.

Alexa lost the title to Sasha Banks at SummerSlam, only to regain the title eight days later on Raw, She retained the title in a five way match at No Mercy, and at Survivor Series, Alexa lost a Champion vs Champion match to newly crowned SmackDown Women's Champion Charlotte.

In July 2018, Alexa was engaged in a feud with her former friend and ally Nia Jax. Earlier in the year, Alexa had been caught admitting she was only using Nia as muscle, and made fun of her weight. On the 9th July edition of RAW, Alexa assaulted Natalya and Nia Jax with a kendo stick. She struck Natalya with the stick to send her to the outside of the ring, and then turned her attention to Nia. The evil Alexa repeatedly hit Nia with the kendo stick and the commentators acknowledged how much Alexa seemed to be enjoying herself. She couldn't hide her joy at the pain she was inflicting, and sadistically grinned every time she struck Nia with the stick. In a backstage segment later in the night, Alexa admitted that she found her assault on Nia to be exhilarating, and loved the sound of the stick striking Nia over and over. 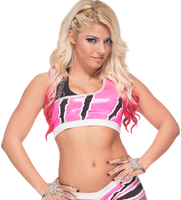 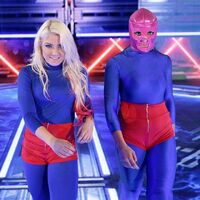 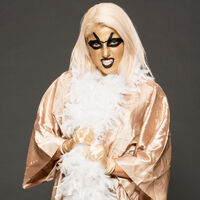 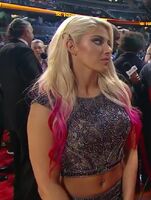 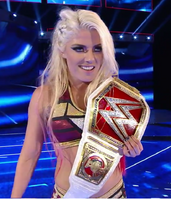 RAW 15th May 2017: Alexa strikes Bayley on the back of her head with a kendo stick

RAW 29th May 2017: Alexa has some fun hitting Bayley with a kendo stick yet again

RAW 30th October 2017: Alexa defeats Mickie James after one strike to the face

RAW 9th July 2018: Alexa really enjoys herself as she beats Nia Jax with a kendo stick 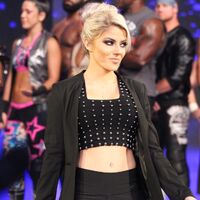 Alexa as a heel manager on Raw
Add a photo to this gallery
Retrieved from "https://femalevillains.fandom.com/wiki/Alexa_Bliss_(WWE)?oldid=130337"
Community content is available under CC-BY-SA unless otherwise noted.