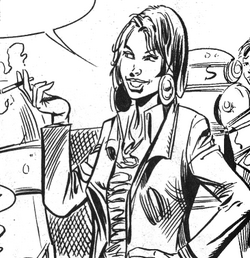 Three years before the story begins, Alexa had attempted to rob a post office. However, Betty - the story's protagonist and who happened to be standing in line behind her at the time - managed to spot the gun. She moved quickly to report this to a nearby police officer and Alexa was ultimately arrested and sentenced to 28 months in jail.

Around the time that Alexa obtained her freedom, Ghor and Nahqor - two aliens from the planet Wuush - were forced to make an emergency landing on Earth. Stranded, they were forced to eat whatever plants and animals they could find, and each tasted terrible. That is, until they decide to try a male and a female human. They determine that the male's flesh is too leathery, but that the female's is tender and exquisite in taste. Desiring to market this "newly discovered food" and proceeded to look for a human so unscrupulous that she would have no problem betraying her own kind; which they eventually found, in Alexa.

Cut to the present day, Betty is now working at a tailory in Nashville Tenesee. Simply by chance, Alexa chooses this business to abduct more females from and is more than amused to find the woman who put her in jail sitting there. Using technology given to her by the Wuushians, Alexa paralyzes all of the female employees in the room. She then has all three of her male cohorts rape Betty together in celebration of their reunion.

Alexa transports Betty and the others to a secret factory in an arid desert area, where they process the humans into food. She then gives her nemesis the tour, showcasing how the women are brined, butchered, and even forced to mate with other creatures that the Wuushians have a taste for, with the hope that they may breed something even more delicious. Rather than rushing into killing Betty right away, however, Alexa decides to degrade her for a while via forced sexual servicing and torture.

The days go on and the Betty's abuse continues; at one point even being forced to eat the flesh of one of her friends from the tailory. Eventually, however, Alexa decides that she has had her fill of fun and pushes her slave into the alien rape chamber which eventually leads to a pregnancy.

Alexa's comeuppance finally comes several months later when she goes to check how far long Betty is. As she does, a tentacle lashes out of the vagina and wraps itself around Alexa's neck. The entire alien offspring exits completely and begins to feast on the evil woman, allowing Betty a chance to escape. The heroine manages to release some of the newly-captured girls from their restraints, however, Alexa who was able to get away herself, ultimately has the last laugh. Dragging herself down a corridor in her mutilated state, the villainess makes her way to a switch which controls the doors to the monster chambers. With her dying breath, Alexa unlocks them, dooming Betty and the rest of the captured girls. 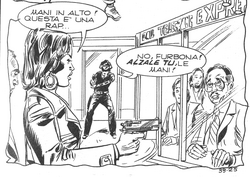 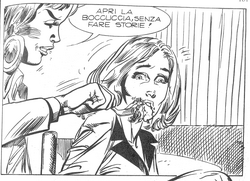 Retrieved from "https://femalevillains.fandom.com/wiki/Alexa_(Storie_Blu_Special)?oldid=174286"
Community content is available under CC-BY-SA unless otherwise noted.