Start a Wiki
watch 01:51
The Loop (TV)
Do you like this video?
Alex Forrest (Glenn Close) is the main antagonist in the 1987 thriller Fatal Attraction.

Dan Gallagher, the main protagonist, meets Alex Forrest and the two begin an affair while his wife and daughter are on vacation. When they come back he ends the affair, however Alex refuses to let go and does numerous things to force Dan into continuing their affair. She calls Dan but hangs up when his wife Beth answers. She tells Dan that she is pregnant with his child.

When their daughter gets a pet rabbit Alex sneaks into the house and boils the rabbit alive. She even kidnaps the daughter and takes her on a ride at a amusement park to scare Beth. She sneaks into the house once again in an attempt to murder Beth with a kitchen knife, but is fought off by Dan and is apparently drowned in the bathtub. When he's not looking, Alex suddenly rises from the tub, intending to murder Dan for nearly killing her. Before she can stab him, however, Alex is suddenly shot in the chest with a pistol by Beth, finally killing her. Her corpse is then taken away (off-screen) by the police. 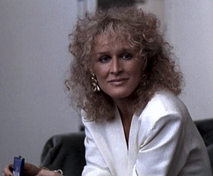 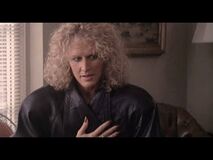 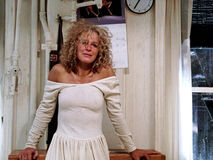 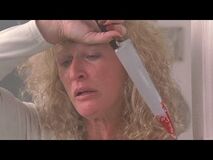 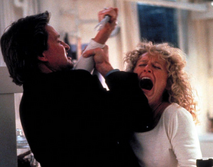 Add a photo to this gallery
Retrieved from "https://femalevillains.fandom.com/wiki/Alex_Forrest_(Fatal_Attraction)?oldid=151156"
Community content is available under CC-BY-SA unless otherwise noted.