Alecto was the leader of the Three Furies, and was differential in the fact that she had blonde hair that grew increasingly longer in subsequent episodes. The other two members were Megaera and Tisiphone. The Three Furies represented Hatred, Jealousy, and Murder, and were called the daughters of Uranus.

The Furies are first seen dancing for Ares (Kevin Smith) in a ritualistic manner in the episode "The Furies" in 1997. Ares is able to charm Alecto into deeming Xena (Lucy Lawless) guilty of neglecting to punish the death of her father. They force Xena to bring her mother Cyrene (Darien Takle) to their temple, where they are tricked by Xena and Cyrene into thinking Ares is Xena's father. The leave, informing Ares that the other Gods will hear of his misuse of their powers.

Later, Athena (Paris Jefferson) summoned the Furies in order to use them against Xena and Gabrielle (Renee O'Connor) in hopes that it would stop the Twilight of the Gods. The Furies went inside of Gabrielle's head, taunting her with images of Hope and Joxer (Ted Raimi) until she succumbs to madness and stabs Xena's daughter Eve (Adrienne Wilkinson) . After their job was completed, they left Gabrielle's mind and returned to Mount Olympus.

When they left Gabrielle's head they stayed in the tavern, invisible. Xena sensed them and managed to hit Megaera in the stomach with her sword, and to hit both Tisisphone and Alecto with her Chakram).

After the deaths of the other gods, the Furies decided they would rule mankind themselves. They disguised themselves as Xena, Gabrielle, and Eve, and psychologically tortured a now-mortal Ares, pitting him against the Amazons. After driving Ares insane and forcing him to supposedly kill Xena, the Furies were killed by the chakram, which had been used by Xena moments before. 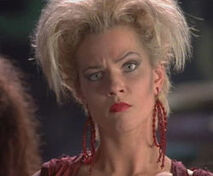 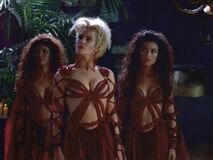 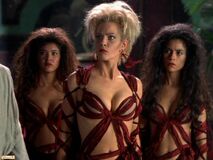 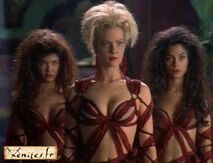 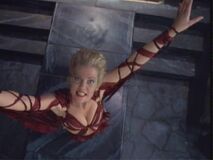 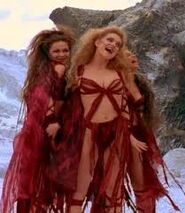 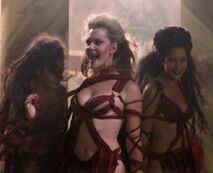 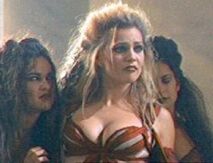 Add a photo to this gallery
Retrieved from "https://femalevillains.fandom.com/wiki/Alecto_(Xena:_Warrior_Princess)?oldid=170859"
Community content is available under CC-BY-SA unless otherwise noted.