"You shame Sparta, oath-breaker. You think you want truth, but truth will only bring you pain!"
―Alecto

Alecto is one of The Furies who pursued Kratos for breaking his bond with Ares. She is the main antagonist in God of War: Ascension.

Alecto is one of the three Furies, or Erinyes, in Greek mythology. Alecto was charged with punishing those who committed moral crimes as anger, especially when used against others, she was the goddess of Anger. Like her sisters, she was born from the blood of Ouranos when Cronos castrated him.

Alecto and her sisters pursue Kratos for breaking his blood oath to Ares. Upon encountering Orkos in Delphi, Kratos is informed that the Furies were once fair in their judgement and punishment, but became ruthless because of Ares, the God of War who convinced the Furies to help him conspire against Olympus. Alecto, the Fury Queen, and Ares had conceived a child who they hoped would aid them in their mission to bring down Olympus. However, the child, Orkos, was considered weak by Ares and was thus disowned. To please his mothers, Orkos became the oath-keeper. He turned against his mothers once they blinded his lover, Oracle Aletheia, and unjustly punished Kratos.

As Kratos travels to Delos in search of the Statue of Apollo. Hiding in the sea in her monstrous form, Alecto tries to hinder Kratos's progress by destroying several ships and tossing them at both Kratos and the Statue. Several times, Alecto attacks Kratos with her tentacles but is unable to kill him, or even stop him from making sufficient progress. After Kratos severs one of Megaera's arms and 'kills' Tisiphone, Alecto later returns to her human form and subdues Kratos, ordering him to return to Ares' side, and that if he were to serve his purpose well he may even end up on Olympus one day, to which the Ghost of Sparta defiantly refused. Tisiphone and Megaera rejoin Alecto and prepare to capture Kratos before Orkos returns and saves Kratos, the two men fled to a separate part of the Statue, as the Furies hunt them down.

Later on in the game, after Kratos has reassembled the Statue of Apollo and entered the Lantern, which contains the Eyes of Truth, he encounters the three Furies once more. The sisters also have a subdued Orkos with them. Tisiphone and Megaera hold Orkos in place as Alecto captures Kratos and takes him to be tortured within the prison of Aegeon the Hecatonchires.

Eventually, Kratos breaks free from his chains, attacking and hunting Megaera throughout the Prison. Shortly before her death at Kratos's hand, Megaera stated that both Alecto and Tisiphone had been too kind to him.

After killing Megaera and reclaiming both the Amulet of Uroborus and Oath Stone of Orkos, Kratos enters Alecto's Chamber to confront the two remaining Furies: Alecto and Tisiphone. Within the chamber, Kratos finds his daughter Calliope sleeping soundly and his wife Lysandra waiting for him. As he prepares to sleep with Lysandra, he spotted the ring on her, the totem Orkos told him to use to show what was real and what was not, and he discovers all around him is an illusion. Lysandra is revealed to be Alecto, who promises Kratos that if he remains in servitude to Ares, the Furies will provide him with endless illusions of his wife to keep him happy. Kratos coldly rebuffs Alecto, infuriating her. She drops the illusion and attempts to kill him, but Kratos evades her attack and manages to snatch the Eyes of Truth hanging from her hip. Alecto retreats further into her sanctum before realizing the Eyes are gone and summons Tisiphone to kill Kratos once and for all. As Tisiphone created the illusion that Alecto's Chamber was a giant whirlpool, Alecto morphs back into her sea-monster form and attacks Kratos.

After a long battle against the sisters, Kratos heavily injures Alecto's monster form by impaling a ship mast into her mouth and carving her skull open. The whirlpool-illusion fades back to Alecto's Chamber, as the weakened Fury Queen resorts to her human form. As Kratos approaches Alecto, Tisiphone and her pet, Daimon, attack him once more. Kratos kills both before impaling Alecto in the chest with his Blades of Chaos. As she lies dying, Alecto promises Kratos that her death will not free him from his madness.

Kratos then bisects Alecto and her remains quickly disintegrate and flees as the chamber begins to collapse.

Alecto's words later proved truth, as Orkos revealed that his mothers remade him the oath keeper, thus ensuring Kratos' bond to Ares. However, Kratos grants Orkos a mercy killing at his request, freeing him of his bond.

According to the Scribe of Hecatonchires, Alecto and her sisters were once honorable judges. Although they were merciless in their judgement, they were fair, only punishing those who really deserved it, like the Oath Breakers.

Everything changed when she aligned herself with Ares. From that day onwards, she was a ruthless queen for whom the crime was no longer important, as long as the punishment was severe. Together with her sisters, she tried to help Ares to overthrow Olympus and start a new rule. It was Alecto who mated with Ares in an attempt to create the marked warrior. However, the child she conceived was a disappointment. Ares rejected his son and started his quest to find a human soldier who could be his pawn. Alecto wasn't completely heartless, and made her son the oath keeper instead of killing him. Years later, she helped Ares to test Kratos and it was she and her sister who created the three blood tests. Alecto is very deceptive: she takes the form of Lysandra and tried to sleep with Kratos in order to keep him on Ares' leash. Her final trait was her fearlessness in the face of death, as exemplified by how she keeps taunting Kratos even seconds from being killed by Kratos.

Alecto is the Queen of the Furies and so has the greatest amount of power. She has shown to posses the following abilities: 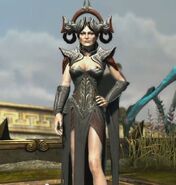 Add a photo to this gallery
Retrieved from "https://femalevillains.fandom.com/wiki/Alecto_(God_of_War:_Ascension)?oldid=172484"
Community content is available under CC-BY-SA unless otherwise noted.