The Female Villains Wiki
Register
Don't have an account?
Sign In
Advertisement
in: 2010s, Boss, Callous,
and 11 more

Albertina Thenard was a villainess from "One Dead More", case #57 of Criminal Case: Mysteries of the Past, the 4th season of the crime solving game Criminal Case (release date December 21, 2017). She was a local baker in Concordia who was found dead on the river shore, having been stabbed to death.

While Albertina was initially stated as being a kind and generous woman by Inspector Jaubert and Colette (a young girl living out of Albertina's shop until her mother could find work), her true nature began to be revealed to the player and Maddie O'Malley by Enzo Jonas, who was later identified as Albertina's son. Enzo revealed that Albertina regularly sold bread to the homeless camp set up in the Crystal Palace, thus getting rich off the misfortune of those who lost their homes and money under Mayor Justin Lawson's rule. It was also discovered that Albertina treated Jaubert with disrespect due to this poor upbringing and had neglected to tell Colette that her mother had died a few weeks prior, having been planning to keep Colette as her servant.

Towards the end of the case, it was also revealed that homeless mother Adelia Baldwin had gotten work at Albertina's shop after begging for her help at the homeless camp, only for Albertina to pay her with a moldy loaf of bread after a month of work. The evil and greedy Albertina also forced Adelia to act as a prostitute for her customers, threatening to take her infant son Paris from her if she refused. Despite this, Albertina still refused to pay Adelia enough to support herself and Paris, driving the desperate Adelia to kill Albertina at the river shore, knocking her out with a wine bottle before stabbing her to death. 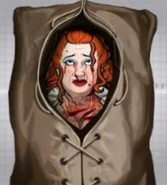