Start a Wiki
watch 01:50
The Loop (TV)
Do you like this video?
Akivasha (Tia Carrere) was a villainess in the 1997 film "Kull the Conqueror".

Akivasha was raised from the dead by Enaros.  Akivasha resided in the Temple of Set, in Khemi, the capitol of Stygia.  She lived off the priests, magicians, and virgins captured and brought to her.

When Conan came to the Temple of Set, in search of the Heart of Ahriman, he was pulled asside by Akivasha as he walked the corridors.  At first he believed her to be just a fair-skinned maiden. He followed her when she offered to take him to Thutothemes, who had the Heart.  However, whithin her chambers, as she sought to seduce him, he found the empty sarcophagus of Akivasha.  This made him realize her true nature.  Nonetheless, she entranced him with her tale, and sought to make him her own.

She said, "Love me, O Man!  Give me your blood to perpetuate my youth, and I will make you too immortal...for I weary of priests and magicians and captive screaming virgins!  I desire...a man, love me, barbarian..love me!"

As her teeth pierced his neck, Conan overcame her spell and hurled her away.  He drew his sword and threatened to cut her in half if she approched him again.  Then her chamber went black and Conan rushed out of it in a mad panic, leaving behind her hellish laughter.

After Kull wounds Taligara and kills Enaros, Zareta kisses Kull and passes the Breath of Valka to him, who kisses the now fully demonic Akivasha to transmit Valka's Breath and extinguish her flame forever. 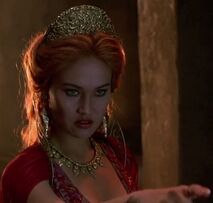 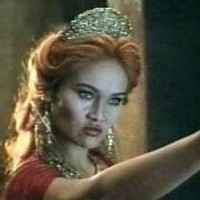 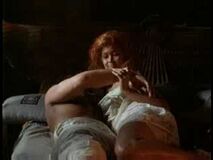 Add a photo to this gallery
​​​​
Retrieved from "https://femalevillains.fandom.com/wiki/Akivasha_(Kull_the_Conqueror)?oldid=146914"
Community content is available under CC-BY-SA unless otherwise noted.