Ain is a slender, curvaceous young woman with reddish-brown eyes and dark blue hair framing her face, which is held back with a hairpiece in the same upside down Marine symbol that Z uses. Like Z, she wears a black and gold captain's coat, while underneath her clothes appear quite formal due to her high heels, black leggings, and brown top and skirt. She also wears a large white bow on the front of her collar. When she was a marine, she wore a sleeveless shirt with a tie. Her second (main) battle outfit consists of a blue hooded cape (the Neo Marine jolly roger on the back), a sleeveless white collar purple top that exposes her belly button, grey mini shorts that exposes her long legs, black high heels, and a holster on her right leg.

Ain ate the Modo Modo no Mi which can turn back the age of anything and anyone through an energy orb she produces. This can extend to inanimate objects, such as the ground, which she can use to trap her victim when they wedge themselves into it by re-tightening the earth. If she is in a volcanic area, she can also turn rock formations back into lava to attack her enemies indirectly. 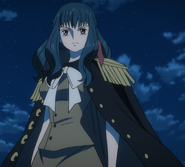 Add a photo to this gallery
Retrieved from "https://femalevillains.fandom.com/wiki/Ain_(One_Piece_Film:_Z)?oldid=194406"
Community content is available under CC-BY-SA unless otherwise noted.