Aimee Brells (Leslie Bibb) is the primary antagonist of the 2016 YouTube Red series, "Rhett and Link's Buddy System".  Aimee appears in all 8 episodes of the first season.

Aimee is a psychotic ex-girlfriend of both Rhett McLaughlin and Link Neal who runs an informercial business.

She attempts to take over Rhett and Link's show, "Good Mythical Morning", by using the channel to upload infomercials for a variety of very strange products.  She does this by gaining access to the channel by stealing Link's lost phone.  The heroic duo end up on random adventures during the 8-episode series while attempting to stop her.

In the final scene, she has Rhett and Link trapped in a re-creation of their high school prom.  She attempts to use a mind-controlling top-hat on Link in order to kill the two of them.  However, a sexy brunette Magician's Assistant (Jenna Bryant) walks up and removes the hat from Link's head and places it on Aimee's head. Since the hat is being worn by the person attempting to control it, it malfunctions and fries her brain, which causes her to collapse to the floor, dead. The heroes and all of the other attendees to the fake prom immediately break out into a celebratory song and dance session.

The Magician's Assistant was a conjured up girl by Rhett and Link's friend Maxwell (Page Kennedy), who used her for his magic act.  She was unable to speak, and when she opened her mouth all she could do was shriek. 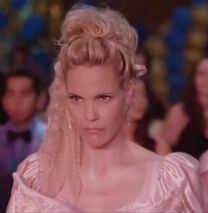 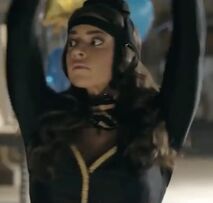 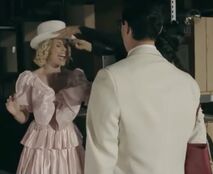 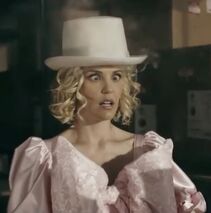 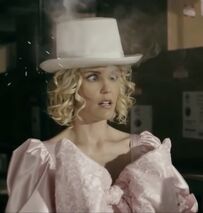 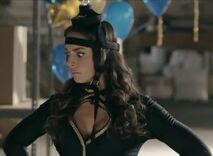 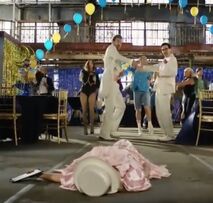 Add a photo to this gallery
Retrieved from "https://femalevillains.fandom.com/wiki/Aimee_Brells_(Rhett_and_Link%27s_Buddy_System)?oldid=86873"
Community content is available under CC-BY-SA unless otherwise noted.