Start a Wiki
watch 01:51
The Loop (TV)
Do you like this video?
Agre (Soledad Cima Herrera) is the main villainess and final boss of the 2017 Amiga video game The Dream Of Rowan.

She is an evil Queen, who was once trapped in the world of dreams by the protagonist, Rowan’s, father, where she was thought to have been sealed for good. But Agre returns from the world and attacks Rowan’s sister. The wicked Queen steals her heart so that she can rejuvenate herself and rule the world by enslaving mortals. Rowan has to make his way to the evil Agre’s home, the castle in the sky, and defeat her.

You battle Agre in her throne room, the villainess has blue hair and wears a very short red minidress. She attacks you by shooting fireballs from both a standing position as well as in the air, and will try to hover into you as well, which you can avoid by ducking. Once defeated, she will fall to her knees and disintegrate. 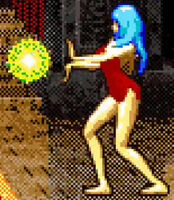 In air with fireball

In air with fireball

Rowan ducks as she flies by him 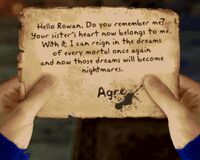 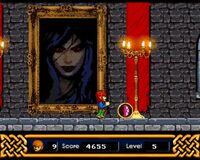 Portrait in her castle 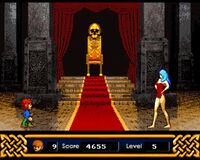 Rowan face to face with the evil Agre

GAME OVER: Agre flies into Rowan

GAME OVER: Agre fires at Rowan

Agre in the instruction manual
Add a photo to this gallery
Retrieved from "https://femalevillains.fandom.com/wiki/Agre_(The_Dream_Of_Rowan)?oldid=185593"
Community content is available under CC-BY-SA unless otherwise noted.