Aggie Wilkins, who owned a general store at a town near the Ozark River, is the ex-girlfriend of bank robber Zeke Harkins. Harkins had buried the loot somewhere in the small town, and broke out of prison to reclaim it, but Aggie had knowledge of Harkins' loot and was looking to get it for herself.

Aggie found the directions in Zeke's spellbook and went on the search, but the Hatfields moving in was an obstacle, so Aggie dressed up as the Ghost of Witch McCoy to scare them off. She used her pet cat to trick the Hatfields into believe that she could morph into a cat, and then held the family captive and replaced them with frogs--with the belief that they had been turned into frogs by the witch.

Both Aggie and Zeke were undone by Mystery Inc, when they disguised themselves as the "ghosts" of the Hatfields to scare them. The pair ended up falling in their own trap, and they were both captured and arrested. 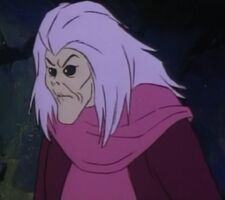 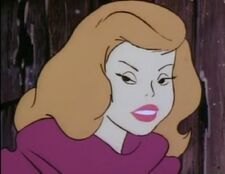 Aggie Wilkins caught and unmasked
Add a photo to this gallery
Retrieved from "https://femalevillains.fandom.com/wiki/Aggie_Wilkins_(The_Scooby_Doo_Show)?oldid=77591"
Community content is available under CC-BY-SA unless otherwise noted.