Start a Wiki
watch 01:51
The Loop (TV)
Do you like this video?
Agent Kalashnikov (Laurence Bouvard), also erroneously spelt as Agent Kalaschnikov, is a villainess from the animated series Robotboy. She appears in the 2006 episode The Babysitter.

She is an evil Russian spy who has been hired by the show’s main villain, Dr. Kamikazi. Agent Kalashnikov is a beautiful blonde woman who wears a very short dark dress and white high heeled boots. She is very flirtatious and seems to be attracted to Dr. Kamikazi, who acts nervously when she flirts with him.

Her first appearance is outside the home of the protagonist Tommy, and his older brother Donnie. She hides in a bush and beats up a young girl called Wendy as she walks by. Wendy was on her way to babysit Tommy and Donnie, but now finds herself knocked out at the hands of the villainess. With the babysitter taken out, the evil Agent Kalashnikov knocks on the door of the young heroes’ house and introduces herself as Wendy’s cousin, and replacement, Suzie. She manages to disguise her Russian accent well with a fake American one.

Donnie is immediately enamoured by the blonde beauty, and his younger brother seems to find her charming too. Agent Kalashnikov asks Tommy if he has any cool action figures, and indicates she wants to see them, but Donnie butts in and says Agent Kalashnikov should come up to his room and hang out with him instead. When she gets there, Donnie is lifting weights and trying to impress her, but she attacks him from behind with a chop to the back of the head. The weight then lands on Donnie’s head and knocks him out, as Agent Kalashnikov looks on with satisfaction at her work.

With the older brother taken care of, Agent Kalashnikov makes her way to Tommy’s room. Inside, she notices Robotboy on the shelf and asks to see him, but Tommy becomes very defensive and won’t allow her to. Agent Kalashnikov decides to drop the act, and makes it clear she has come to the house to take Robotboy. She sprays Tommy with gas, which knocks him out, and then grabs Robotboy.

As she is about to leave, Tommy’s friend Gus shows up at the house, after leaving earlier. Agent Kalashnikov immediately tries to kill him with throwing knives, but the young boy takes cover behind the couch. As the evil spy approaches him, Gus stamps on her foot, which causes her to yell out in pain and drop Robotboy. Tommy appears and reactivates Robotboy, and he and Agent Kalashnikov battle each other. The Russian villainess activates spikes on her handbag, and uses it as a weapon by swinging it at the heroes. During the fight, Agent Kalashnikov knocks a clock over and it lands on Robotboy, which gives her the chance to kidnap Tommy and escape from the house with him.

However, Robotboy manages to overpower Kalashnikov’s minions, much to her surprise. He then fires blades at Kalashnikov’s ship, causing the tentacles to fall off, which also causes Tommy to fall out of the ship as well. Robotboy saves Tommy before he hits the ground, and then fires at Kalashnikov’s spaceship, causing it to explode. However, the villainess manages to escape from the blast safely, and she is last seen with a winged contraption on her back flying away. 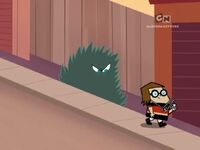 Hiding in the bushes...

...so she can beat up the babysitter 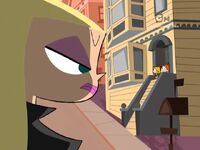 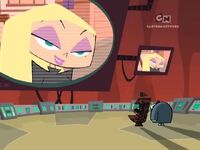 Kalashnikov reporting in to Dr. Kamikazi

Donnie opens the door to this 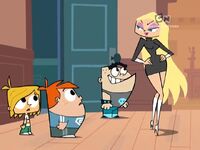 Kalashnikov makes her way into the house 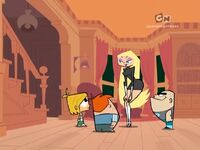 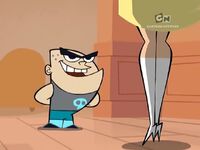 ...but Donnie insists she'd have more fun in his room 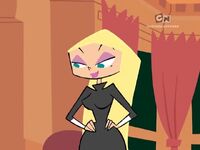 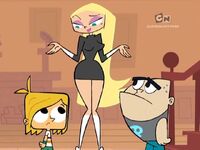 Agent Kalashnikov and the two brothers 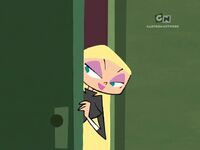 She makes her way up to Donnie's room... 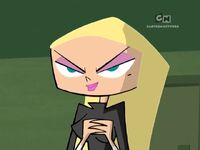 ...and her plans something evil 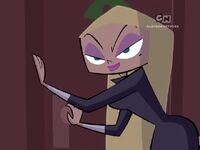 She makes her move to Tommy's room 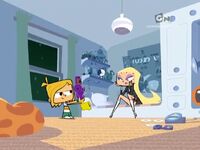 A bored Kalashnikov watching Tommy show off his toys... 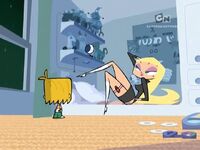 ...she'd rather see Robotboy on the shelf

She sprays Tommy and knocks him out cold 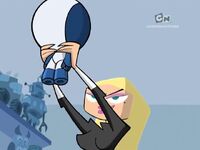 She tries to kill Gus with throwing knives 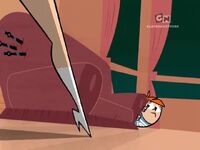 the evil Kalashnikov approaches the boy...

...but Gus strikes first by stamping on her foot

She tries to kill the heroes with her spiked handbag 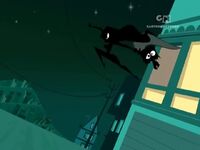 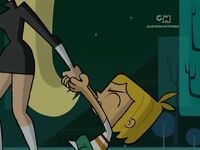 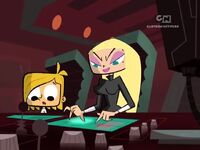 Kalashnikov controlling the ship with her captive at her side 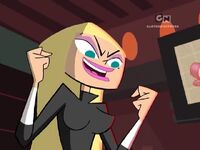 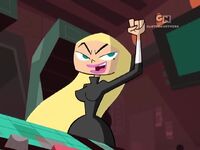 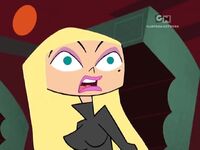 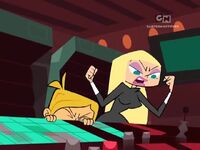 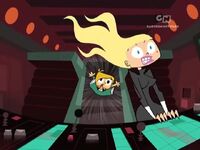 Robotboy cuts off the tentacles, which sets Tommy free 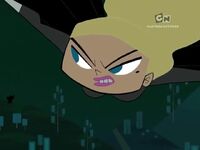 ...but she survives, and flies away
Add a photo to this gallery
Retrieved from "https://femalevillains.fandom.com/wiki/Agent_Kalashnikov_(Robotboy)?oldid=187341"
Community content is available under CC-BY-SA unless otherwise noted.