Agatha (Tammy Tavares) was a secondary villainess of "Second Skin", episode 1.05 of the Stage 13 web series Two Sentence Horror Stories (airdate October 31, 2017). She was first shown attending a high-class social event with her husband Jeffrey. After finding Jeffrey talking to coat taker Luna (the episode's protagonist), Agatha shrewdly pulled her husband away after dropping some change into the tip jar.

Later on, Luna was invited for a free visit to a spa owned by fellow event attendee Mare for her troubles, where Luna was suddenly cornered and drugged by a pair of men. When she awoke, she found herself being auctioned off by Mare, who had lured Luna to the "spa" to sell her flesh as part of her coven's goal maintaining their beauty forever.

Agatha's villainous reveal came when Mare introduced her to Luna as a villainous member of her coven, with the evil Agatha beginning the auction for Luna's skin. Agatha ultimately won the bid, but when Mare prepared to skin Luna, her would-be victim fought back and killed Mare before donning the white cloak worn by all of the coven's members. The episode's epilogue showed Luna (now donning a red dress) attending another social event as the beginning, as a different coat taker heard a news report about a group of affluent women who had disappeared. As Luna gave the girl her bag and claimed she was there to "reconnect with an old friend", she spotted Agatha from across the room, with the episode ending on the implication that Luna had killed Mare's coven and planned to do the same to Agatha. 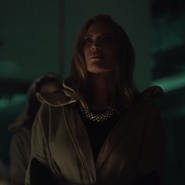 Agatha's reveal as a member of Mare's coven 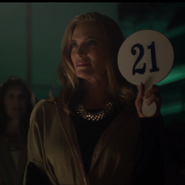 Agatha bidding on Luna's skin
Add a photo to this gallery
Retrieved from "https://femalevillains.fandom.com/wiki/Agatha_(Two_Sentence_Horror_Stories)?oldid=171008"
Community content is available under CC-BY-SA unless otherwise noted.