Aethyr (Alana De La Garza) is a Kryptonian villainess who appeared on Smallville's fifth season premiere, "Arrival" (airdate September 29, 2005). She and Nam-Ek are the final survivors of Krypton, and they crashlanded on Earth and wreaked havoc. They startled Lana Lang with their appearance, and they attacked police officers who arrived at the scene.

Aethyr and Nam-Ek were searching for Kal-El (Clark Kent), and during their pursuit, the alien villainess assaulted Jonathan Kent and Lois Lane at a nearby hospital. Lana arrived and stated to the pair that she could lead them to Kal-El, stating that he was at the Luthor mansion. It was actually a trap orchestrated by Lana, as one of the rooms was filled with Kryptonite.

After sealing the room, the evil Aethyr attacked Lana, only for her and Nam-Ek to be confronted by Clark. It was there that the duo revealed their true plan: attempting to align with Clark to turn Earth into a new utopia, which would involve killing innocent citizens. After Clark refused, Aethyr opened a portal to the Phantom Zone, in an attempt to trap Clark inside. Clark avoided the vortex and sent Aethyr and Nam-Ek inside. 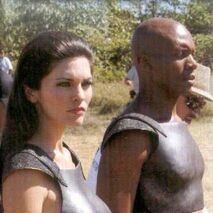 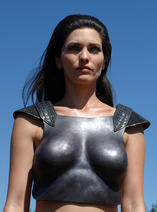 Retrieved from "https://femalevillains.fandom.com/wiki/Aethyr_(Smallville)?oldid=187130"
Community content is available under CC-BY-SA unless otherwise noted.