Start a Wiki
watch 01:48
The Loop (TV)
Do you like this video?
Adrienna Brassiere is a recurring character and villainess from Criminal Case: Mysteries of the Past. She was a prostitute operating out of Sinner's End who was considered a suspect in five murder investigations before becoming a villainess in case #36, "In Love and War" (release date July 27, 2017).

Over the course of the investigations she was involved in, it was revealed that Adrienna aligned with the Irish gang, which was in perpetual conflict with the Italian community of Concordia. She was also close with the gang's latest leader, Seamus O'Neill; but unbeknownst to Adrienna, Seamus was conspiring with Giulietta Capecchi (Seamus' lover and the daughter of deceased Italian gang leader Vittorio Capecchi) to end the war between the Italian and Irish communities, with Seamus' joining of the gang being part of a plan to destroy it from the inside.

During "In Love and War", Adrienna learned about Seamus' relationship with Giulietta while she was spying on Giulietta's mother Franca. Enraged at Seamus for (in her mind) betraying the gang, Adrienna attacked Seamus in the train station as he was attempting to disarm a bomb set up by Franca, striking him in the head with a standing ash tray. When Adrienna was told about Seamus' demise by the player and Maddie O'Malley, Adrienna feigned shock at the news to cover up her villainous secret, though she later admitted that she had grown frustrated by Seamus' inability to trust her, despite all the work she did for the gang.

Ultimately, traces of Adrienna's clothing found on the standing ash tray (among other clues) outed Adrienna as Seamus' killer. When confronted by the player and Maddie, Adrienna eventually confessed to murdering Seamus, blasting him for betraying the Irish by starting a relationship with Giulietta, referring to her as "the daughter of their mortal enemy". In response to Maddie telling her that Seamus and Giulietta were trying to end the gang war in Concordia, the evil Adrienna proclaimed that it was too late to do that and that the Irish deserved to take the Italians down for everything they'd been through. Adrienna continued this argument in court, claiming that the Irish had sacrificed too much to end the war without a fight. After blasting Adrienna for her association with the violent and destructive gang war, Judge Justin Lawson sentenced Adrienna to life in prison. 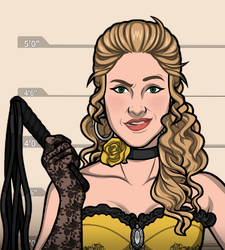 Adrienna as she appears in "In Love and War" 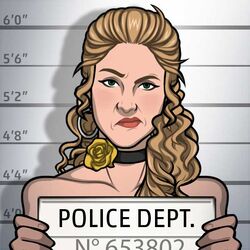 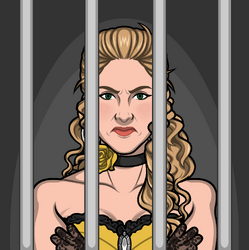 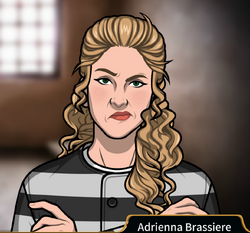 Add a photo to this gallery
Retrieved from "https://femalevillains.fandom.com/wiki/Adrienna_Brassiere_(Criminal_Case)?oldid=172798"
Community content is available under CC-BY-SA unless otherwise noted.