Start a Wiki
watch 01:51
The Loop (TV)
Do you like this video?
Adriana (Claudia Islas) is a secondary antagonist in the 1968 Mexican sci-fi film “Con Licencia Para Matar”, which translates to “With License to Kill”.

Adriana is a henchwoman for the evil scientist Dr. Klux (Noe Murayama), who has built invincible super robots who are controlled by remote control to do his bidding.  The robots first start out by taking a shipment of gold and killing the policemen who are guarding it.

When the robots attack Las Tigresas, the only thing that repels them and allows the girls to get away is the heat from a steam bath.  It seems that the heat threatens to melt the robots.

Dr. Klux arrives to make a business deal with the owner of the dance club, who is also a criminal organization.  Dr. Klux brings his right hand woman Adriana to help with the deal.

Las Tigresas go undercover in the club to figure out what is going on.  Leonor disguises herself as a man and catches the eye of Marga (Martha Yolanda Gonzalez), one of the other henchwoman for Dr. Klux.  The two dance together and then sit at a table and have a drink.  However, Leonor’s mustache and goatee soon becomes loose and she is exposed.  As a result, Marga pulls out her pistol and takes her at gunpoint to Dr. Klux.

Adriana pretends to aide the Tigresas in finding Dr. Klux, but she traps them in a room with rotating light that burns all it touches.  Diana uses a blow torch hidden in her high heels to break through the wall and escape.

Dr. Klux betrays Adriana and Marga.  He shoots Adriana in the belly and has the robots kill the rest of his men.  Marga is picked up by one of the robots who bear hugs her to death, while Dr. Klux laughs.

The radio relay controlling the robots is shot with an arrow by Diana, which causes it to catch on fire.  As a result, the robots are destroyed.  Dr. Klux is electrocuted when power lines drop on him.  The Tigresas escape just prior to the robot lair exploding, engulfing a dying Adriana. 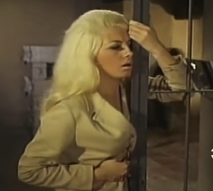 Add a photo to this gallery
Retrieved from "https://femalevillains.fandom.com/wiki/Adriana_(Con_Licencia_Para_Matar)?oldid=186369"
Community content is available under CC-BY-SA unless otherwise noted.