Start a Wiki
watch 01:51
The Loop (TV)
Do you like this video?
Adrea Spedding (Gale Sondergaard) is the main villainess in the 1943 mystery thriller "The Spider Woman".

Sherlock Holmes fakes his own death in Scotland in order to investigate a number of bizarre apparent suicides that he is convinced are part of an elaborate plot by "a female Moriarty".  Holmes then collaborates with his assistant Watson in secret, and disguises himself as Rajni Singh, an Indian officer.

Holmes encounters the villain, Adrea Spedding, and discovers that she seeks out men short of money.  She persuades them to pawn their life insurance policies with her accomplices, then kills them.

Holmes sets himself up as her next victim, discovering that she uses the deadly spider, Lycosa Carnivora, whose venom causes such excruciating pain that the victims kill themselves.  Holmes also finds the footprint of a child nearby.

Searching for evidence Holmes and Watson visit eminent anarchologist Mattew Ordway, who may have supplied the deadly creatures.  Holmes soon realizes that the man he is speaking to is an imposter, but the villain makes his escape.  Searching the premises, Holmes finds the corpse of the real Ordway, as well as his journals, which allude to something or someone from Central Africa immune to the spider venom. This baffles Holmes until he finds the model skeleton of a child. However, Dr. Watson points out that the relation of the skull and the circumference of the chest prove it is not a child, and Holmes deduces that the Central African thing described in the journal is a pygmy.

Holmes and Watson continue their investigations at a nearby fairground, where Holmes allows himself to fall into the clutches of Spedding and her gang. Bound and gagged, Holmes is tied behind a moving target in a shooting gallery, at which Lestrade and Watson take pot shots with a .22 rifle. However Holmes manages to escape, and Lestrade and the police arrest Spedding, her gang, and the pygmy.

Adrea Spedding has the looks, the wardrobe, the sexy personality to put it over on men, but she is as cold and calculating as a machine.  She doesn't care so much about killing one way or another.  The idea of taking someone's life means absolutely nothing to her at all.  If she has to, she will and it won't bother her. She doesn't feel that she has to kill someone for any great dramatic purpose.  Killing is just a means to achieve an end. 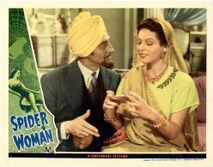 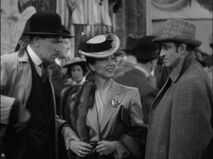 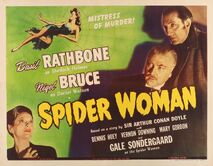 Add a photo to this gallery
Retrieved from "https://femalevillains.fandom.com/wiki/Adrea_Spedding_(The_Spider_Woman)?oldid=134526"
Community content is available under CC-BY-SA unless otherwise noted.