Start a Wiki
watch 01:50
The Loop (TV)
Do you like this video?
Adnan Salif (Nazanin Boniadi) was a recurring villainess from Season Three of Scandal. She was an associate of notorious terrorist Maya Lewis.

Adnan first appeared in episode 3.11, "Ride, Sally, Ride," and was revealed as a past associate of Harrison Wright during his time with Wall Street before his arrest on insider trading. Harrison was worried about Adnan's appearance, and he held her at gunpoint upon arrival, only for the pair to end up embracing romantically. It was in the following episode, "We Do Not Touch the First Ladies," that Adnan had blackmailed Harrison to help her get into a donor dinner, doing so by having Harrison send a huge donation to President Fitz Grant's campaign. It was at the event that she was shown meeting Cyrus Beene, and the episode ended with Adnan revealing herself as an ally of Maya Lewis.

Adnan and Maya's plan was to kill Fitz on U.S. soil, but their search for bombers saw Maya kill a pair of Russian criminals vying for the job in episode 3.14, "Kiss Kiss Bang Bang." The following episode, "Mama Said Knock You Out," saw an apparently panicked Adnan report to Olivia Pope and Associates, acting scared for her life and willing to tell everything about Maya's plan, in exchange for immunity. Later in the episode, Adnan attempts to seduce Harrison, who rebuffs her before falling for her charms, and it was at that moment that the evil Adnan injected Harrison with a syringe, drugging him before taking a flash drive that later contained everything about Fitz:  his itinerary, Secret Service detail, and contingency plans, among other things.

As shown in episode 3.16, "The Fluffer," Adnan and Maya colluded with Ivan Yuskhin in the plan, with Ivan planting the bomb that was devised by Dominic Bell. In the season's penultimate episode, "Flesh and Blood," Adnan held Harrison at gunpoint, threatening to kill him after he had known about their entire plans, only for Harrison to convince Adnan to spare him in exchange for his silence. Adnan lets him go in the season finale, "The Price of Free and Fair Elections," and it was later in the episode that Adnan was shot and killed by B613 member Tom Larsen, under the orders of Command. 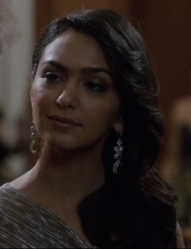 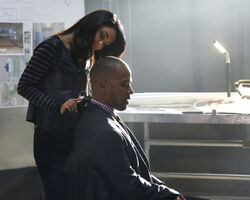 Add a photo to this gallery
Retrieved from "https://femalevillains.fandom.com/wiki/Adnan_Salif_(Scandal)?oldid=99025"
Community content is available under CC-BY-SA unless otherwise noted.