Start a Wiki
watch 01:48
The Loop (TV)
Do you like this video?
Adina (Jud Tylor) was a recurring villainess from Season Ten of Supernatural. She is a rogue angel who (like many others) fell from Heaven during the events of the Season Eight finale, and she had been hiding out on Earth with her fellow angel lover, Daniel.

Adina and Daniel had no plans to return to Heaven, and when an angel attempted to return them, they killed him, which prompted Hannah and Castiel to find the villains and take them in. During the climactic scenes of the season opener, "Black," Adina appeared and interrupted Hannah and Cas' talk with Daniel, boldly stating that she has no plans to return to Heaven, while holding an angel blade. Daniel attempted to talk Adina down, only for the villainess to attack Hannah and wound her. In the melee, Castiel killed Daniel to protect Hannah, which led to Adina attacked Castiel before escaping.

In the episode, "Soul Survivor," the evil Adina resurfaced at a convenience store and killed a cashier before holding Hannah hostage. Adina voiced her desire for revenge over Daniel's death, telling Castiel that she would kill him slowly and force Hannah to watch. After beating down Castiel, Adina went after Hannah and began her process of killing her, all while blaming her for what happened to Daniel. At that moment, Crowley appeared and cut open Adina so he could take her grace, and killed the villainess afterwards. 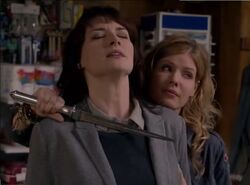 Adina holding Hannah hostage
Add a photo to this gallery
Retrieved from "https://femalevillains.fandom.com/wiki/Adina_(Supernatural)?oldid=150695"
Community content is available under CC-BY-SA unless otherwise noted.