Kill her stepmother to inherit her fortune (succeeded)

Adele was born in South Korea, and at the age of six, she was adopted by wealthy Taylor Meyerson and his wife, Jane. Her relationship with Jane was shaky, as it was indicated that Jane wasn't welcoming to her adopted daughter, while Taylor was the opposite; as he doted on Adele and spoiled her. Taylor passed away some time ago, after which Jane and Adele's relationship deteriorated even more, to the point where Adele was cut off financially. However, Adele was the recipient of a $300 million dollar inheritance, and on the night of a college party, Adele turned heel and stabbed Jane to death--inserting the knife 37 times during the murder. The deranged villainess phoned 911 regarding her mother's death, after which she was institutionalized by Tessa Meyerson, Taylor's sister. On trial, several family members testified against Adele, leading to her conviction.

During Madeline Scott's visit to the prison, she encountered Adele, who claimed that like Madeline was a decade prior, she was wrongfully convicted of murder. Madeline and Ezekiel "Easy" Boudreau took the case and visited Adele, which included playing her stoic 911 call (which got her convicted). She proclaimed her innocence and stated that her family members testifying against her were solely due to the fact that they were named in Jane's will. The main benefactor was Tessa, who received her late brother's estate, making her a suspect.

After Tessa was revealed to have an alibi, Madeline and Easy were running short on suspects until Arthur Kauffman--a criminology professor--gave a theory that Jane was actually murdered by Carter Leopold, a serial killer who often hunted down and stabbed wealthy women to death. An email correspondence between Jane and Leopold led to the latter being cross-examined by Madeline, with Leopold denying sending the emails. His refusal to answer questions that could potentially incriminate him ended up leading to Adele being acquitted in her retrial, and in the final scenes, Adele and Kauffman were guests on Violet Bell's podcast, with the former thanking the group for exonerating her.

However, Violet noticed Kauffman passing something to Adele, and her suspicions led to her recording the both of them alone. The conversation revealed the entire truth, not only did Adele really kill her adoptive mother, but she colluded with Kauffman in a plan to free her. As heard in the recordings, the evil Adele thanked Kauffman for devising the emails, and it was also revealed that they were lovers. Madeline and the rest of the group fretted over the realization that they had been tricked by Adele and that they unknowingly released a proven murderess, and regarding Adele, her last scene in the episode showed her and Kauffman kissing each other. 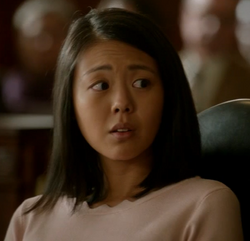 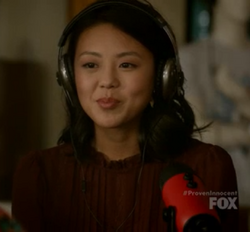 Add a photo to this gallery
Retrieved from "https://femalevillains.fandom.com/wiki/Adele_Meyerson_(Proven_Innocent)?oldid=160358"
Community content is available under CC-BY-SA unless otherwise noted.