Start a Wiki
watch 01:48
The Loop (TV)
Do you like this video?
Adele Bensimon (Tammy Blanchard) is the hidden main villainess from Bull's pilot episode, "The Necklace" (airdate September 20, 2016). She is the mother of Taylor Bensimon and the best friend of Gail Peters, who is the mother of Brandon Peters.

In the episode, Brandon Peters was on trial based on accusations that he killed Alyssa Yang, who was supposedly Brandon's girlfriend, during a party on a yacht belonging to Brandon's wealthy father, Pete Peters. Dr. Jason Bull took the case, and it was during the episode's progression that he met with both Gail and Adele. The latter of the women stated that Taylor begged her to have Alyssa, who she accused of only befriending Taylor just to get to Brandon, with Adele and Gail giving the indication that Taylor and Brandon were a couple.

Taylor was later cross-examined herself, with the process revealing that Taylor gave Alyssa a necklace that Adele gave her, while an angry text to Alyssa about Brandon led her to be suspected. However, during Bull's conversation with Brandon, he revealed what Brandon was hiding: he was gay. Brandon was actually with a man while Alyssa was murdered, and he testified to that in the episode's climax, but would not reveal who his lover was.

Brandon ended up acquitted in Alyssa's murder, and Adele was spotted rushing Taylor to her therapist's office, while Bull gave a telling glance at not only Adele, but her husband, Freddie, after noticing Brandon exchanging glances at him. The end of the episode confirmed that Freddie was Brandon's secret lover, as Adele was scolding him over his affair. After their argument, however, Adele walked towards her dresser, opened her jewelry box, and took out the necklace. Her sinister expression while holding the necklace ended up revealing the truth: Adele was Alyssa's killer.

Adele had been dead set on Taylor and Brandon being together; all the while, she was fully unaware of Brandon's sexual orientation. Adele turned heel once Alyssa entered the picture, as she saw Alyssa as an obstacle to her daughter's happiness and decided to kill her. The villainess strangled Alyssa to death during the yacht party, and took the necklace off her after the murder. While clutching the necklace during the final scene, the evil Adele glanced at a framed photo of Taylor and stated that she didn't want her to be unhappy, and it was at this moment that she heard police sirens and saw Bull outside her window with the officers. Adele ended up arrested (off-screen) for Alyssa's murder. 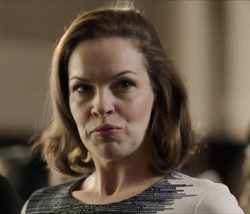 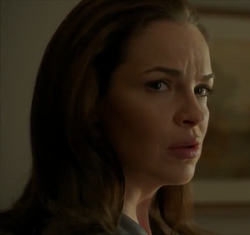 Adele's expression before her eventual arrest
Add a photo to this gallery
Retrieved from "https://femalevillains.fandom.com/wiki/Adele_Bensimon_(Bull)?oldid=174717"
Community content is available under CC-BY-SA unless otherwise noted.