Abby Russell is a serial killer who murders men who cheat on their women, a job she thoroughly enjoys, as it allows her to "keep the scum off of the streets".

She murders a man by slicing through his femoral artery and then throwing hin off the roof of a nightclub.  The following day she attends the graduation ceremony of nurse Danni Rodgers (Katrina Bowden), a student she has been mentoring, where she meets Danni's mother and stepfather Larry Cook (Martin Donovan).  However, Danni is ill-prepared for her first true day of nursing duty and is berated by her superior, Dr. Robert Morris (Judd Nelson) for her inability to respond quickly to an emergency situation.  Abby views the situation with disgust, as she knows that Dr. Morris is a sadist who enjoys harassing new nurses.

Abby is further irritated when Danni chooses to call her paramedic boyfried, Steve (Corbin Bleu), for support rather than approaching Abby herself. She is pleased when Danni's call to Steve ends badly due to a fight over Danni's refusal to move in with hin.  She explains to Abby that she is unwilling to trust her stepfather enough to leave hin alone with her mother.  This distrust is later justified when Abby and Danni witness her stepfather having an affair while the two women are on their way to go drinking at a nightclub, which results in Danni drinking that night.  Unbeknownst to her, however, Abby spikes her drink with a date rape drug, which enables Abby to get Danni and have sex with both her and random strangers.  The next day Danni wakes to find herself in Abby's apartment and leaves, despite Abby's plea for Danni to skip work and spend the day with her.  Afterwards, Abby downloads several photos that she had taken from the previous night before leaving to see a psychiatrist, which is revealed to be Larry.

Abby seduces Larry by saying she's addicted to men, alluding to her past history with her father.  Confirming that he is unfaithful to Danni's mother, Abby shows up at his place of work one day and convinces hin to give her a ride, during which she paralyzes himn with vecuronium bromide, resulting in a car accident.  After hearing of her stepfather's death, Danni seeks solace from Abby, only for Abby to grow angry when Danni sahs that she's going to move in with her boyfriend.  Abby comments that she hopes that Larry's genitals were severed in the car crash.  When Danni realizes that Abby knbows about the car crash even though Danni never told her how he died, Danni leaves.  This infuriates Abby, who decides that instead of seeking to help Danni, she will now hurt her.  She accomplishes this by slowly convincing Detective John Rogan (Boris Kodjoe) that Danni is mentally unstable and obsessed with Abby.

The next day, Abby runs into Rachel Adams (Melanie Scrofano), a new human resources employee that remarks that Abby greatly reselbles a girl she knew that was sent to a mental institution.  Abby invites Rachel out for drinks and takes the opportunity to harass Danni by calling her via Skype and showing Danni a video of Abby injecting chemicals into Rachel.  Danni tries to go to the police, only for Detective Rogan to dismiss her claims as evidence of her trying to hurt Abby because the other woman didn't return her affections.  He uses the photographs Abby took as proof to this effect, which Steve sees as a result of Danni summoning himn to the police station for support.  This prompts an argument between the two, and Steve leaves in a fit of anger.  Danni tries to pretend to agree to this arrangement but uses the opportunity to dismember and murder him.  That same night Abby also knocks out Rachel and drags her away to her death.

Danni goes to the mental institution that Rachel had referred to, where she learns abouyt Sarah Price, a little girl who killed her father after learning he was having an affair, and witnessing hin severely beating her mother.  Danni discovers that Sarah was taken in by a nurse at the institution named Abigail Russell.  Danni then realizes that Abby is Sarah and has taken the name of her caretaker.  Danni then tries to call Rachel to warn her about Abby, only to find that Rachel's phone is in her car.  She then receives a call from Abby, who implies that she will kill Steve in the same manner as Rachel.

Danni rushes to the hospital, where she and Abby begin to fight.  The staff initially tries to intervene, only for Abby to set off on a killing spree and lock herself into a lab.  Dannie and Steve pursue her, and Abyy stabs Steve in the neck and runs off.  Abby rushes honme, where she is confronted by Detective Rogan, who tries to arrest her.  Noticing that her neighbor Jared is viewing the situation, Abby pretends that Rogan is trying to rob her.  Her neighbor then comes outside and hits the detective over the head with a bat, killing him instantly.  Her neighbor is horrified to discover that Rogan is a cop, but Abby convinces him to hide the body, saying that Rogan was corrupt and that Jared would be treated badly since he is now a cop killer.  Abby assumes the identity of human resources employee Rachel Adams. 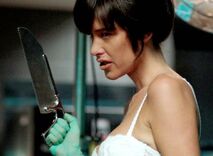 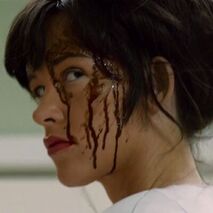 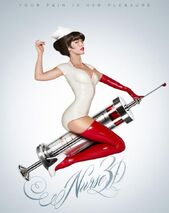 Tumblr n0slkz2KmN1qdgzyfo1 1280.jpg
Add a photo to this gallery
Retrieved from "https://femalevillains.fandom.com/wiki/Abby_Russell_(Nurse_3D)?oldid=209114"
Community content is available under CC-BY-SA unless otherwise noted.