Start a Wiki
watch 01:39
The Loop (TV)
Do you like this video?
AJ Lee is a retired professional wrestler and manager best known for competing in WWE, where she portrayed a villainess.

AJ became a villainess in FCW when she stood by and watched FCW Divas Champion Naomi get attacked by the villainous Serena Deeb during an interview segment. Weeks after her heel turn, the evil AJ expressed jealousy of Naomi in a different interview segment, and she would eventually defeat Naomi to win the FCW Divas Championship in December of 2010.

At TLC in December 2012, AJ turned heel by costing John Cena the ladder match and aligning herself with Dolph Ziggler. She claimed that Cena didn't care about her, just like Daniel Bryan, Kane, and CM Punk in the past. Months later, AJ engaged in a feud with Kaitlyn, which led to one of her most villainous acts: having her friend Big E Langston pose as a secret admirer to Kaitlyn and breaking her heart at the week before Payback. AJ would defeat the distraught Kaitlyn at Payback to win the WWE Divas Championship. She would add insult to injury by dressing at Kaitlyn and mocking the moment that she was humiliated by her and Big E.

After costing Dolph Ziggler a chance to win the World Heavyweight Championship from Alberto Del Rio, Ziggler broke up with her the next night on RAW. Out of revenge, AJ cost Ziggler his rematch against Del Rio and then had Big E Langston attack him. AJ's feud with Kaitlyn continued after she lost a non-title match to her a week later. Four days later on SmackDown, AJ successfully defended her title against Kaitlyn after Layla turned heel against Kaitlyn during the match. AJ aligned with the evil Layla for weeks following Layla's villainous turn, defeating Kaitlyn in singles and tag team matches.. 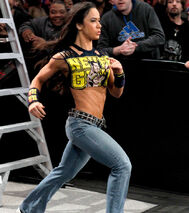 AJ Lee skipping away with the evil Layla

Retrieved from "https://femalevillains.fandom.com/wiki/AJ_Lee_(WWE)?oldid=198145"
Community content is available under CC-BY-SA unless otherwise noted.