AJ was introduced as Susan Emory (her real name was revealed in the following episode, "XX") in the beginning of the episode, which showed her flirting with a man before stabbing him to death. As it turned out, AJ's victim was one of a number of members of the Attorney General's office who she had killed, and it was revealed in the aforementioned following episode that the members, as well as FBI Agent Rachel McCord and her squad, were all killed in order to prevent the exposure of a memo simply known as "Loksat."

One of the main targets was Kate Beckett, who was about to enter her first day as NYPD captain before she suddenly went missing. Richard Castle's search for Beckett led to him encountering AJ in the episode's midpoint, with the villainess abducting and drugging Castle before taking him to an abandoned warehouse. Once there, AJ and an unnamed male assassin tortured Castle by placing a plastic bag full of spiders and scorpions over his head, while demanding Beckett's whereabouts. Castle maintained his lack of knowledge of his wife's whereabouts, and he was later saved by detectives Javier Esposito and Kevin Ryan, as well as Beckett, who shot and killed the male assassin.

AJ was taken into custody and refused to answer Ryan and Castle's questions regarding who sent her, while also adding that another team of assassins would be sent after Beckett. Just as she was set to be officially arrested, the evil AJ stole a gun from one officer and opened fire in the station, shooting another officer (non-fatally) before being shot and killed by Esposito. AJ appeared in flashbacks in "XX," where it was revealed that she (among other assassins) was working under the orders of the evil Allison Hyde, the Assistant Attorney General and a Loksat conspirator. 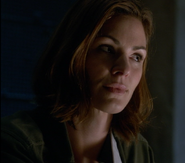 AJ after being shot by Esposito
Add a photo to this gallery
Retrieved from "https://femalevillains.fandom.com/wiki/AJ_(Castle)?oldid=169731"
Community content is available under CC-BY-SA unless otherwise noted.