A-Squad Pink (Motoko Nagino) is a villainess from Power Rangers SPD. As her name suggests, she is the traitorous A-Squad's Pink Ranger.

The following episode, "Endings (Part 1)", begins with the villainous Rangers revealing their alliance with Grumm, while Cruger is imprisoned. Later on, the sets of Rangers battled each other, with A-Squad Pink targeting her heroic B-Squad counterpart, Syd, During the battle, A-Squad Pink displayed her heel persona and trash-talked Syd, claiming to be above her and the other B-Squad Rangers..

The B-Squad defeats the A-Squad with the SWAT Megazord, and in defeat, Charlie snarls defiantly at Jack. Charlie and the rest of the A-Squad Rangers are judged and imprisoned for their treason. 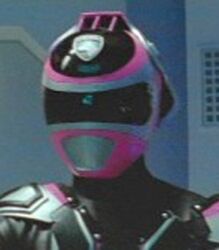 A-Squad Pink Morphed
Add a photo to this gallery

She was given the name 'Rachel' by a rangerboard user 'Merlin'. Supposedly, the name is accepted in general fandom.

Retrieved from "https://femalevillains.fandom.com/wiki/A-Squad_Pink_(Power_Rangers_SPD)?oldid=142865"
Community content is available under CC-BY-SA unless otherwise noted.